“We have 8 queens and an 8x8 Chess board having al ternate black and white squares. The queens are placed on the chessboard. Any queen can attack any other queen placed on same row, or column or diagonal. We have to find the proper placement of queens on the Chess board in such a way that no queen attacks other queen”. 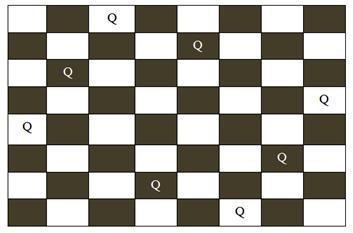 Figure A possible board configuration of 8 queen problem

In figure , the possible board configuration for 8-queen problem has been shown. The board has alternative black and white positions on it. The different positions on the board hold the queens.

The production rule for this game is you cannot put the same queens in a same row or same column or in same diagonal. After shifting a single queen from its position on the board, the user have to shift other queens according to the production rule.

Starting from the first row on the board the queen of their corresponding row and column are to be moved from their original positions to another position. Finally the player has to be ensured that no rows or columns or diagonals of on the table is same.

state. The time factor for each queen‟s move is very lengthy. The problem is very strict towards the production rules.