In divide and conquer approach, the problem in hand, is divided into smaller sub-problems and then each problem is solved independently. When we keep on dividing the subproblems into even smaller sub-problems, we may eventually reach a stage where no more division is possible. Those "atomic" smallest possible sub-problem (fractions) are solved. The solution of all sub- problems is finally merged in order to obtain the solution of an original problem. 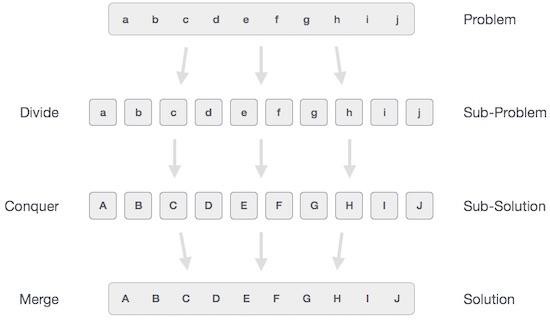 Broadly, we can understand divide-and-conquer approach in a three-step process.

This step receives a lot of smaller sub-problems to be solved. Generally, at this level, the problems are considered 'solved' on their own.

When the smaller sub-problems are solved, this stage recursively combines them until they formulate a solution of the original problem. This algorithmic approach works recursively and conquer & merge steps works so close that they appear as one.

2. Quick Sort is a sorting algorithm. The algorithm picks a pivot element, rearranges the array elements in such a way that all elements smaller than the picked pivot element move to left side of pivot, and all greater elements move to right side. Finally, the algorithm recursively sorts the subarrays on left and right of pivot element.

3. Merge Sort is also a sorting algorithm. The algorithm divides the array in two halves, recursively sorts them and finally merges the two sorted halves.

6. Cooley–Tukey Fast Fourier Transform (FFT) algorithm is the most common algorithm for It is a divide and conquer algorithm which works in O(nlogn) time.

single-digit multiplications in general (and exactly

There are various ways available to solve any computer problem, but the mentioned are a good example of divide and conquer approach.