Applications and Technologies of M-Commerce, Different generations of Wireless Communication

The general m-commerce applications are:

Tickets can be sent to mobile phones using a variety of technologies. Users are then able to use their tickets immediately by presenting their phones at the venue.

Tickets can be booked and cancelled on the mobile with the help of simple application downloads or by accessing WAP portals of various Travel agents or direct service providers. Mobile ticketing for airports, ballparks, and train stations, for example, will not only streamline unexpected metropolitan traffic surges, but also help users remotely secure parking spots (even while in their vehicles) and greatly facilitate mass surveillance at transport hubs.

Mobile ticketing technology can also be used for the distribution of vouchers, coupons and loyalty cards. The voucher, coupon, or loyalty card is represented by a virtual token that is sent to the mobile phone. Presenting a mobile phone with one of these tokens at the point of sale allows the customer to receive the same benefits as another customer who has a loyalty card or other paper coupon/voucher. Mobile delivery enables:

Currently, mobile content purchase and delivery mainly consists of the sale of ring-tones, wallpapers, and games for mobile phones. The convergence of mobile phones, mp3 players and video players into a single device will result in an increase in the purchase and delivery of full-length music tracks and video. Download speeds, if increased to 4G levels, will make it possible to buy a movie on a mobile device in a couple of seconds, while on the go.

A wide variety of information services can be delivered to mobile phone users in much the same way as it is delivered to PCs. These services include:

Particularly, more customized traffic information, based on users' travel patterns, will be multicast on a differentiated basis, instead of broadcasting the same news and data to all Users. This type of multicasting will be suited for more bandwidth-intensive mobile equipment.

Banks and other financial institutions are exploring the use of mobile commerce to allow their customers to not only access account information, but also make transactions, e.g. purchasing stocks, remitting money, via mobile phones and other mobile equipment. This service is often referred to as Mobile Banking or M-Banking. More negative issues like ID theft, phishing and pharming are lurking when it comes to mobile banking, particularly done on the mobile web. Net security technology free from redundancy and paradigm shifts away from mobile web-based banking will be an optimal solution to mobile banking in the near future.

Stock market services offered via mobile devices have also become more popular and are known as Mobile Brokerage. They allow the subscriber to react to market developments in a timely fashion and irrespective of their physical location.

Over the past three years Mobile reverse action solutions have grown in popularity. Unlike traditional auctions, the reverse auction (or low-bid auction) bills the consumer's phone each time they place a bid. Many mobile PSMS commerce solutions rely on a one-time purchase or one-time subscription; however, reverse auctions are high return applications as they allow the consumer to transact over a long period of time.

Mobile purchase allows customers to shop online at any time in any location. Customers can browse and order products while using a cheap, secure payment method. Instead of using paper catalogues, retailers can send customers a list of products that the customer would be interested in, directly to their mobile device or consumers can visit a mobile version of a retailer's ecommerce site. Additionally, retailers will also be able to track customers at all times and notify them of discounts at local stores that the customer would be interested in.

Mobile marketing is an emerging concept, but the speed with which it's growing its roots is remarkable. Mobile marketing is highly responsive sort of marketing campaign, especially from brands' experience point of view. And almost all brands are getting higher campaign response rates. Corporations are now using m-commerce to expand everything from services to marketing and advertisement. Although there are currently very few regulations on the use and abuses of mobile commerce, this will change in the next few years. With the increased use of m-commerce comes increased security. Cell phone companies are now spending more money to protect their customers and their information from online intrusions and hackers.

GPRS is a non-voice service that allows speedy transmission of data. It is a packet-switched technology, which means that the data to be sent is broken up into small packets, which are "routed by the network resources is optimized as the resources are needed only during the handling of each packet.

It is a digital transport that divides range assign to it into the series of channel and each channel is divided into time slot. Each conversation within that channel affects that time slot. It is use in Global system for mobile communication (GSM).

In CDMA, a transmitter assign a unique code to each wireless connection and then broadcast its data on the channel simultaneously with all other The receiver is able to decode its conversation by knowing the unique code assign to each connection.

Using an all digital TDMA based network, every GSM phone has access to a variety of data function with the speed of 9600 bits per second. These services include direct connect internet access (circuit switching as well as packet switching) without requiring a modem. Its basic features are:

All text messages sent over 2G are digitally encrypted, allowing for the transfer of data in such a way that only the intended receiver can receive and read it.

Second generation 2G   cellular   telecom   networks   were   commercially   launched   on the GSM standard in Finland by Radiolinja (now part of Elisa Oyj) in 1991.

5G denotes the next major phase of mobile telecommunications standards beyond the current 4G/IMT-Advanced standards.

Next Generation Mobile Networks Alliance feel that 5G should be rolled out by 2020 to meet business and consumer demands. In addition to simply providing faster speeds, they predict that 5G networks will also need to meet the needs of new use-cases such as the Internet of Things as well as broadcast-like services and lifeline communications in times of disaster.

The term Wi-Fi suggests Wireless Fidelity. It is hardware and software devices. It is wireless technology and network connecting device. Wi-Fi is not a technical term. The technical term of Wi-Fi is "IEEE 802.11". The term Wi-Fi, first used commercially in august 1999. Wi-Fi networks have limited range. A typical wireless router with a stock antenna might have a range of 32 meter indoors and 95 meter outdoors. Nowadays Wi-Fi is used in many personal computers, video game consoles, MP3 players, smart phones, printers, digital cameras laptop computers and other devices. Wi-Fi is used to create wireless LAN to connect computer system. 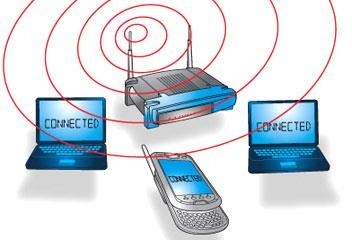 Bluetooth is a wireless technology standard for exchanging data over short distances from fixed and mobile devices. Bluetooth is used to create personal area networks (PANs) with high levels of security. Bluetooth was created by telecoms vendor Ericsson in 1994. 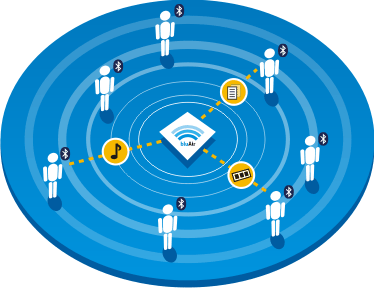