An ATM network consists of a set of ATM switches interconnected by point-to-point ATM links or interfaces. ATM switches support two primary types of interfaces: UNI and NNI as shown in Figure below. The UNI (User-Network Interface) connects ATM end systems (such as   hosts   and   routers) to   an ATM   switch.   The NNI (Network-Network Interface) connects two ATM switches. Depending on whether the switch is owned and located at the customer's premises or is publicly owned and operated by the telephone company, UNI and NNI can be further subdivided into public and private UNIs and NNIs. A private UNI connects an ATM endpoint and a private ATM switch. Its public counterpart connects an ATM endpoint or private switch to a public switch. A private NNI connects two ATM switches within the same private organization. A public one connects two ATM switches within the same public organization. 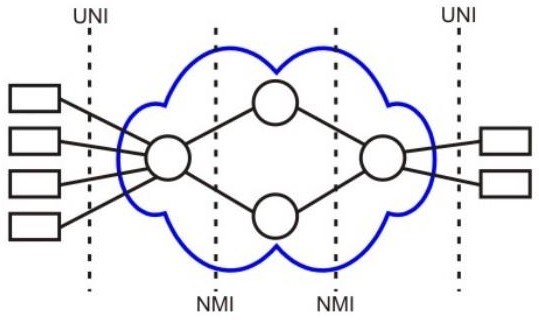 Figure: UNI and NNI interfaces of the ATM

ATM   operates   as   a channel-based transport    layer; using Virtual   circuits   (VCs). This is encompassed in the concept of the Virtual Paths (VP) and Virtual Channels. Every ATM cell has an 8- or 12-bit Virtual Path Identifier (VPI) and 16-bit Virtual Channel Identifier (VCI) pair defined in its header. Together, these identify the virtual circuit used by the connection. The length of the VPI varies according to whether the cell is sent on the user- network interface (on the edge of the network), or if it is sent on the network-network interface (inside the network).

As these cells traverse an ATM network, switching takes place by changing the VPI/VCI values (label swapping). Although the VPI/VCI values are not necessarily consistent from one end of the connection to the other, the concept of a circuit is consistent (unlike IP, where any given packet could get to its destination by a different route than the others).

Another advantage of the use of virtual circuits comes with the ability to use them as a multiplexing layer, allowing different services (such as voice, Frame Relay, n* 64 channels, IP).

A virtual path connection (VPC) is a bundle of VCCs that have the same endpoints. Thus, all of the cells flowing over all of the VCCs in a single VPC are switched together 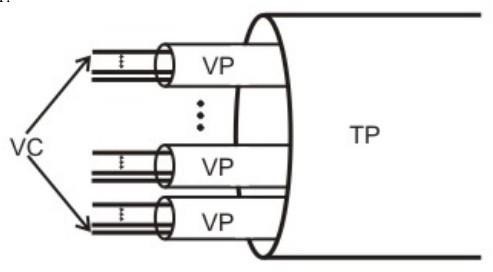