Bubble Sort is a simple algorithm which is used to sort a given set of n elements provided in form of an array with n number of elements. Bubble Sort compares all the element one by one and sort them based on their values.

If we have total n elements, then we need to repeat this process for n-1 times.

It is known as bubble sort, because with every complete iteration the largest element in the given array, bubbles up towards the last place or the highest index, just like a water bubble rises up to the water surface.

Sorting takes place by stepping through all the elements one-by-one and comparing it with the adjacent element and swapping them if required.

Following are the steps involved in bubble sort(for sorting a given array in ascending order):

Below, we have a pictorial representation of how bubble sort will sort the given array. 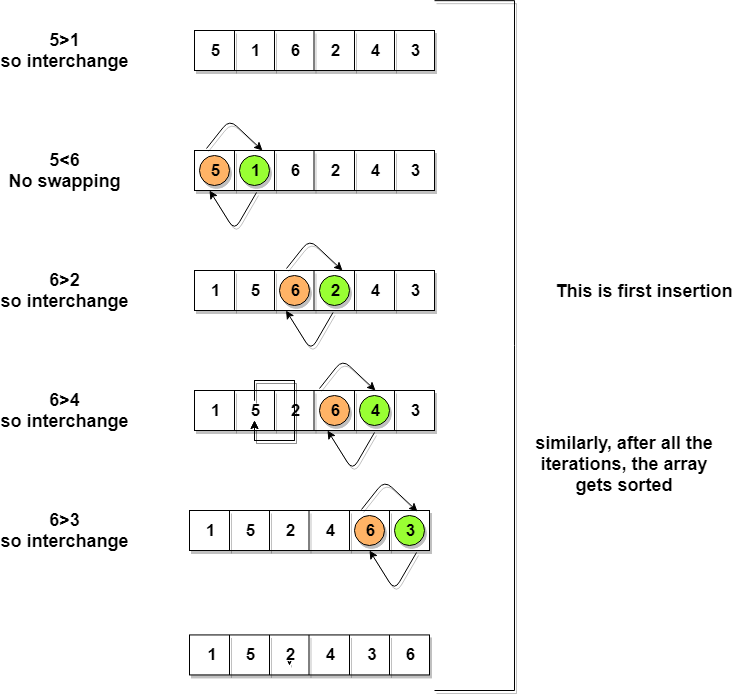 So as we can see in the representation above, after the first iteration, 6 is placed at the last index, which is the correct position for it.

Similarly after the second iteration, 5 will be at the second last index, and so on.

Another Example of Bubble Sort

We take an unsorted array for our example. Bubble sort takes Ο(n2) time so we're keeping it short and precise.

Bubble sort starts with very first two elements, comparing them to check which one is greater.

We find that 27 is smaller than 33 and these two values must be swapped.

Next we compare 33 and 35. We find that both are in already sorted positions.

We know then that 10 is smaller 35. Hence they are not sorted.

We swap these values. We find that we have reached the end of the array. After one iteration, the array should look like this −

Notice that after each iteration, at least one value moves at the end.

And when there's no swap required, bubble sorts learns that an array is completely sorted.

Now we should look into some practical aspects of bubble sort.