Up to seven identical capture/compare blocks, TAxCCRn (where n = 0 to 7), are present in Timer_A. Any of the blocks may be used to capture the timer data or to generate time intervals.

The capture mode is selected when CAP = 1. Capture mode is used to record time events. It can be used for speed computations or time measurements. The capture inputs CCIxA and CCIxB are connected to external pins or internal signals and are selected with the CCIS bits. The CM bits select the capture edge of the input signal as rising, falling, or both. A capture occurs on the selected edge of the input signal. If a capture occurs:

The input signal level can be read at any time via the CCI bit. Devices may have different signals connected to CCIxA and CCIxB. See the device-specific data sheet for the connections of these signals.

Overflow logic is provided in each capture/compare register to indicate if a second capture was performed before the value from the first capture was read. Bit COV is set when this occurs.COV must be reset with software. 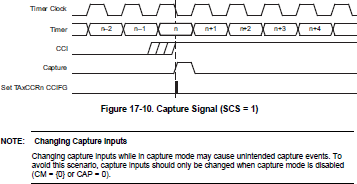 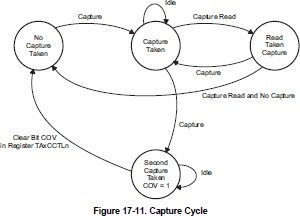 Captures can be initiated by software. The CMx bits can be set for capture on both edges. SoftThe softwaren sets CCIS1 = 1 and toggles bit CCIS0 to switch the capture signal between VCC and GND, initiating a capture each time CCIS0 changes state:

Each capture/compare block contains an output unit. The output unit is used to generate output signals, such as PWM signals. Each output unit has eight operating modes that generate signals based on the EQU0 and EQUn signals.

The output modes are defined by the OUTMOUT MODs and are described in Table 17-2. The OUTnoutnal is changed with the rising edge of the timer clock for all modes except mode 0. Output modes 2, 3, 6, and 7 are not useful for output unit 0 because EQU ofn = EQU0.

Output Example: Timer in Up Mode

The OUTnoutnal is changed when the timer counts up to the TAxCCRn value and rolls from TAxCCR0 to zero, depending on the output mode. An example is shown in FiguFigures12 using TAxCCR0 and TAxCCR1. 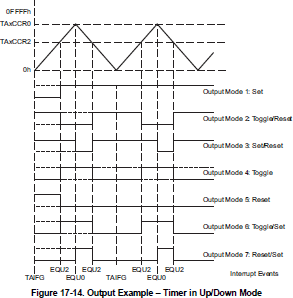