An open system is a set of protocols that allows any two different systems to communicate regardless of their underlying architecture.

Introduction of the OSI Model Diagram

The purpose of the OSI model is to show how to facilitate communication between different systems without requiring changes to the logic of the underlying hardware and software. The OSI model is not a protocol; it is a model for understanding and designing a network architecture that is flexible, robust, and interoperable.

The ISO-OSI model Diagram is a seven-layer architecture. It defines seven layers or levels in a complete communication system. They are: 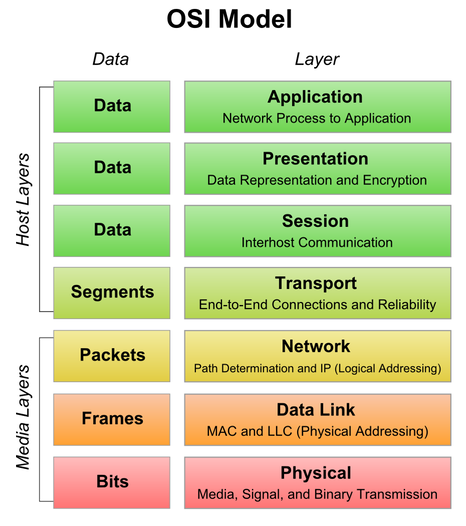 The OSI reference model has 7 layers. The principles that were applied to arrive at the seven layers can be briefly summarized as follows:

The physical layer coordinates the functions required to carry a bit stream over a physical medium. It deals with the mechanical and electrical specifications of the interface and transmission medium.

The physical layer is also concerned with the following:

Physical characteristics of interfaces and medium:

The physical layer data consists of a stream of bits (sequence of Os or 1s) with no interpretation. To be transmitted, bits must be encoded into signals--electrical or optical.

The physical layer defines the type of encoding (how Os and I s are changed to signals).

The physical layer also defines the direction of transmission between two devices: simplex, half-duplex, or full-duplex. In simplex mode, only one device can send; the other can only receive.

The data link layer divides the stream of bits received from the network layer into manageable data units called frames.

If frames are to be distributed to different systems on the network, the data link layer adds a header to the frame to define the sender and/or receiver of the frame.

If the frame is intended for a system outside the sender's network, the receiver address is the address of the device that connects the network to the next one.

The data link layer adds reliability to the physical layer by adding mechanisms to detect and retransmit damaged or lost frames.

It also uses a mechanism to recognize duplicate frames. Error control is normally achieved through a trailer added to the end of the frame.

When two or more devices are connected to the same link, data link layer protocols are necessary to determine which device has control over the link at any given time.

The network layer is responsible for the source-to-destination delivery of a packet, possibly across multiple networks (links). Whereas the data link layer oversees the delivery of the packet between two systems on the same network (links), the network layer ensures that each packet gets from its point of origin to its final destination.

Other responsibilities of the network layer include the following:

The physical addressing implemented by the data link layer handles the addressing problem locally. If a packet passes the network boundary, we need another addressing system to help distinguish the source and destination systems.

The network layer adds a header to the packet coming from the upper layer that, among other things, includes the logical addresses of the sender and receiver. We discuss logical addresses later in this chapter.

When independent networks or links are connected to create internetworks (a network of networks) or a large network, the connecting devices (called routers or switches) route or switch the packets to their final destination. One of the functions of the network layer is to provide this mechanism.

routers (network layer intermediate systems) can instruct a sending station to "throttle back" its frame transmission when the router's buffer fills up.

if it determines that a downstream router's maximum transmission unit (MTU) size is less than the frame size, a router can fragment a frame for transmission and re-assembly at the destination station.

it has accounting functions to keep track of frames forwarded by subnet intermediate systems, to produce billing information.

The transport layer is responsible for the process-to-process delivery of the entire message. A process is an application program running on a host.

Whereas the network layer oversees source-to-destination delivery of individual packets, it does not recognize any relationship between those packets.

Other responsibilities of the transport layer include the following:

A message is divided into transmittable segments, with each segment containing a sequence number. These numbers enable the transport layer to reassemble the message correctly upon arriving at the destination and to identify and replace packets that were lost in transmission.

Like the data link layer, the transport layer is responsible for flow control. However, flow control at this layer is performed end to end rather than across a single link.

Like the data link layer, the transport layer is responsible for error control. However, error control at this layer is performed process-to process rather than across a single link.

The services provided by the first three layers (physical, data link, and network) are not sufficient for some processes. The session layer is the network dialog controller.

The session layer allows two systems to enter into a dialog. It allows the communication between two processes to take place in either half-duplex (one way at a time) or full-duplex (two ways at a time) mode.

The session layer allows a process to add checkpoints, or synchronization points, to a stream of data.

For example, if a system is sending a file of 2000 pages, it is advisable to insert checkpoints after every 100 pages to ensure that each 100-page unit is received and acknowledged independently.

In this case, if a crash happens during the transmission of page 523, the only pages that need to be resent after system recovery are pages 501 to 523. Pages previous to 501 need not be resent.

The presentation layer is concerned with the syntax and semantics of the information exchanged between two systems.

Specific responsibilities of the presentation layer include the following:

The processes (running programs) in two systems are usually exchanging information in the form of character strings, numbers, and so on.

To carry sensitive information, a system must be able to ensure privacy. Encryption means that the sender transforms the original information into another form and sends the resulting message out over the network. Decryption reverses the original process to transform the message back to its original form.

Data compression reduces the number of bits contained in the information. Data compression becomes particularly important in the transmission of multimedia such as text, audio, and video.

The application layer enables the user, whether human or software, to access the network. It provides user interfaces and support for services such as electronic mail, remote file access, and transfer, shared database management, and other types of distributed information services.

This layer contains a variety of commonly needed functions:

Most digital signals are non-periodic, and thus period and frequency are not appropriate characteristics. Another term-bit rate is used to describe digital signals.

The bit rate is the number of bits sent in 1s, expressed in bits per second (bps).