Concept and Types of Network Security

A network security is defined as a circumstance, condition with the potential to cause economic hardship to data or network resources in the form of destruction, disclosure, modification of data, denial of service, and/or fraud, waste, and abuse.

The discussion of security concerns in electronic commerce can be divided into two broad types:

Client/server network security is one of the biggest headaches system administrators face as they balance the opposing goals of user maneuverability and easy access and site security and confidentiality of local information.

According to the National Center for Computer Crime Data, computer security violations cost U.S. businesses half a billion dollars each year.

As figure below illustrates, an Internet connection opens itself to access from other networks comprising the public Internet. 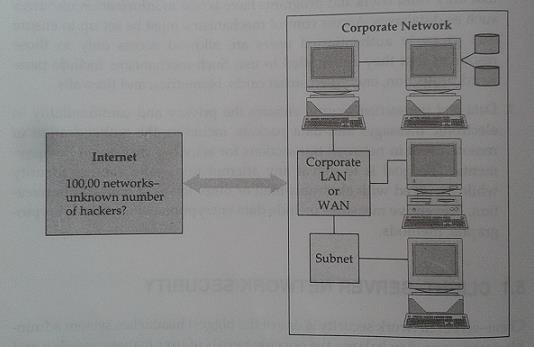 That being the case, the manager of even the most relaxed organization must pay some attention to security. For many commercial operations, security will simply be a matter of making sure that existing system features, such as passwords and privileges, are configured properly. They need to audit all access to the network. A system that records all log-on attempts—particularly the unsuccessful ones—can alert managers to the need for stronger measures. However, where secrets are at stake or where important corporate assets must be made available to remote users, additional measures must be taken. Hackers can use password guessing, password trapping, security holes in programs, or common network access procedures to impersonate users and thus pose a threat to the server.

To reduce these security threats, various protection methods are used. At the file level, operating systems typically offer mechanisms such as access control lists that specify the resources various users and groups are entitled to access. Protection—also called authorization or access control—grants privileges to the system or resource by checking user- specific information such as passwords.

The problem in the case of e-commerce is very simple: If consumers connect a computer to the Internet, they can easily log into it from anywhere that the network reaches. That's the good news. The bad news is that without proper access control, anyone else can too.

Over the years, several protection methods have been developed, including trust-based security, security through obscurity, password schemes, and biometric systems.

Trust-Based Security: Quite simply, trust-based security means to trust everyone and do nothing extra for protection. It is possible not to provide access restrictions of any kind and to assume that all users are trustworthy and competent in their use of the shared network. This approach assumes that no one ever makes an expensive breach such as getting root access and deleting all files (a common hacker trick). This approach worked in the past, when the system administrator had to worry about a limited threat. Today, this is no longer the case.

Security through Obscurity: Most organizations in the mainframe era practiced a philosophy known as security through obscurity (STO)—the notion that any network can be secure as long as nobody outside its management group is allowed to find out anything about its operational details and users are provided information on a need-to-know basis. Hiding account passwords in binary files or scripts with the presumption that "nobody will ever find them" is a prime case of STO (somewhat like hiding the house key under the doormat and telling only family and friends). In short, STO provides a false sense of security in computing systems by hiding information.

Password Schemes: One straightforward security solution, a password scheme, erects a first- level barrier to accidental intrusion. In actuality, however, password schemes do little about deliberate attack, especially when common words or proper names are selected as passwords. For instance, network administrators at a Texas air force base discovered that they could crack about 70 percent of the passwords on their UNIX network with tools resembling those used by hackers.

The simplest method used by most hackers is dictionary comparison— comparing a list of encrypted user passwords against a dictionary of encrypted common words EGCN941. This scheme often works because users tend to choose relatively simple or familiar words as passwords. To beat the dictionary comparison method, experts often recommend using a minimum of eight-character length mixed-case passwords containing at least one non- alphanumeric character and changing passwords every 60 to 90 days.

Biometric Systems: Biometric systems, the most secure level of authorization, involve some unique aspect of a person's body. Past biometric authentication was based on comparisons of fingerprints, palm prints, retinal patterns, or on signature verification or voice recognition. Biometric systems are very expensive to implement: At a cost of several thousand dollars per reader station, they may be better suited for controlling physical access—where one biometric unit can serve for many workers—than for network or workstation access. Many biometric devices also carry a high price in terms of inconvenience; for example, some systems take 10 to 30 seconds to verify an access request.