Just as handwritten signatures or physical thumbprints are commonly used to uniquely identify people for legal proceedings or transactions, so digital signatures are commonly used to identify electronic entities for online transactions. A digital signature uniquely identifies the originator of digitally signed data and also ensures the integrity of the signed data against tampering or corruption.

However, encrypting all data to provide a digital signature is impractical for following two reasons: 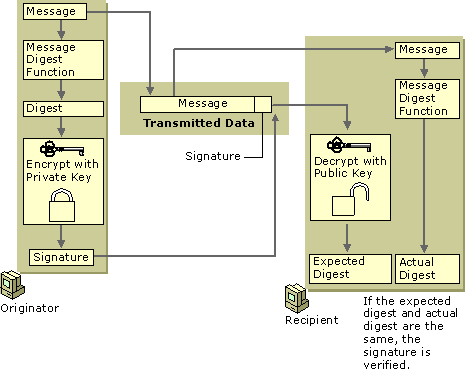 To verify the contents of digitally signed data, the recipient generates a new message digest from the data that was received, decrypts the original message digest with the originator's public key, and compares the decrypted digest with the newly generated digest. If the two digests match, the integrity of the message is verified. The identification of the originator also is confirmed because the public key can decrypt only data that has been encrypted with the corresponding private key.

Process to obtain a Certificate From CA:

One can obtain a certificate for your business from commercial CAs. The Issuing entities of commercial CAs provide certificate with a cost. User can generate a Key pair of its own and generate a Certificate Signing Request (CSR) and then send the CSR to Issuing CA for a certificate. CSR contains the public key of the user and user identity information in a format that issuing CAs would normally expect as shown in figure below.

A Certificate Authority (CA) issues digital certificates that contain a public key and the identity of the owner. The matching private key is not made available publicly, but kept secret by the end user who generated the key pair. The certificate is also a confirmation or validation by the CA that the public key contained in the certificate belongs to the person, organization, server or other entity noted in the certificate. A CA's obligation in such schemes is to verify an applicant's credentials, so that users and relying parties can trust the information in the CA's certificates. CAs uses a variety of standards and tests to do so. In essence, the Certificate Authority is responsible for saying "yes, this person is who they say they are, and we, the CA, verify that".

If the user trusts the CA and can verify the CA's signature, then he can also verify that a certain public key does indeed belong to whoever is identified in the certificate. Browsers maintain list of well known CAs root certificates. Aside from commercial CAs, some providers issue digital certificates to the public at no cost. Large institutions or government entities may have their own CAs.