Encryption is the process of transforming information so it is unintelligible to anyone but the intended recipient. Decryption is the process of transforming encrypted information so that it is intelligible again. A cryptographic algorithm, also called a cipher, is a mathematical function used for encryption or decryption. In most cases, two related functions are employed, one for encryption and the other for decryption.

With most modern cryptography, the ability to keep encrypted information secret is based not on the cryptographic algorithm, which is widely known, but on a number called a key that must be used with the algorithm to produce an encrypted result or to decrypt previously encrypted information. Decryption with the correct key is simple. Decryption without the correct key is very difficult, and in some cases impossible for all practical purposes.

The success or failure of an e-commerce operation depends on different key factors, including but not limited to the business model, the team, the customers, the investors, the product, and the security of data transmissions and storage. Data security has taken on heightened importance since a series of high-profile "cracker" attacks have humbled popular Web sites, resulted in the impersonation of Microsoft employees for the purposes of digital certification, and the misuse of credit card numbers of customers at business-to-consumer e- commerce destinations.

Security is on the mind of every e-commerce entrepreneur who solicits, stores, or communicates any information that may be sensitive if lost. Technologists are building new security measures while others are working to crack the security systems. One of the most effective means of ensuring data security and integrity is encryption.

Encryption is a generic term that refers to the act of encoding data, in this context so that those data can be securely transmitted via the Internet. Encryption can protect the data at the simplest level by preventing other people from reading the data. In the event that someone intercepts a data transmission and manages to deceive any user identification scheme, the data that they see appears to be gibberish without a way to decode it.

Encryption technologies can help in other ways as well, by establishing the identity of users (or abusers); control the unauthorized transmission or forwarding of data; verify the integrity of the data (i.e., that it has not been altered in any way); and ensure that users take responsibility for data that they have transmitted.

Encryption algorithms that use the same key for encrypting and for decrypting information are called symmetric-key algorithms. The symmetric key is also called a secret key because it is kept as a shared secret between the sender and receiver of information. Otherwise, the confidentiality of the encrypted information is compromised. Figure below shows basic symmetric key encryption and decryption. 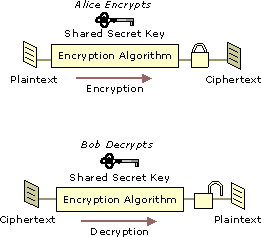 Fig: Encryption and Decryption with a Symmetric Key

Cryptography-based security technologies use a variety of symmetric key encryption algorithms to provide confidentiality. Symmetric algorithms have the advantage of not consuming too much computing power. People can use this encryption method as either a "stream" cipher or a "block" cipher, depending on the amount of data being encrypted or decrypted at a time. A stream cipher encrypts data one character at a time as it is sent or received; while a block cipher processes fixed block (chunks) of data. Common symmetric encryption algorithms include Data Encryption Standard (DES), Advanced Encryption Standard (AES), and International Data Encryption Algorithm (IDEA).

Encryption algorithms that use different keys for encrypting and decrypting information are most often called public-key algorithms but are sometimes also called asymmetric key algorit. Public key encryption requires the use of both a private key (a key that is known only to its owner) and a public key (a key that is available to and known to other entities on the network). A user's public key, for example, can be published in the directory so that it is accessible to other people in the organization. The two keys are different but complementary in function. Information that is encrypted with the public key can be decrypted only with the corresponding private key of the set. Figure below shows basic encryption and decryption with asymmetric keys. 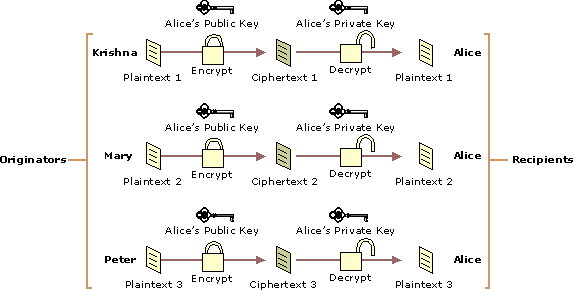