Concept, Types and Causes of Forgetting in Psychology

Forgetting is the temporary or long-term loss in our ability to reproduce the things that have been previously learned. The term forgetting refers to the loss of information already encoded and stored in long term memory.

It is failure to retain what has been acquired. Forgetting means failure at any time to recall an experience, when attempting to do so or to perform an action previously learned.

According to Munn (1967), “ Forgetting is the loss, permanent or temporary, of the ability to recall or recognize something learned earlier”

The psychologist Ebbinghaus is known to be the first man to do an experimental study of forgetting. He put the results of his study on the graph paper by plotting the amount forgotten as a function of time elapsed. The curve so obtained was named as “Curve of forgetting”. 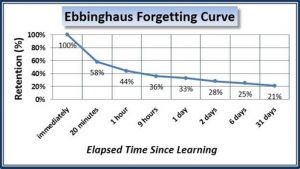 According to some other view, forgetting may be classified as General or Specific. In general forgetting, Forgetfulness once suffer a total loss in once recalling some previous learning while in specific forgetfulness the individual forget only one or the other specific of these earlier learning.

Decay is the loss of information through nonuse (Failure to use something). This explanation for forgetting assume that memory trace, the physical changes that take place in the brain when new material is learned, simply fade away over time (Grann, 2007). According to many psychologists, time is the cause of much forgetting.

Interference is caused on account of the negative inhibiting effects of one learning experience on another. We forget things because of such interference. The phenomenon by which information in memory disrupts the recall of other information.

Another cause of forgetting is motivated forgetting for a reason. The concept of motivating came after Sigmund Freud, who suggested that we forget information because threatening to us in some way.

Retrieval is when we recall or bring a memory into consciousness. Retrieval is facilitated by organization of the stored material.

Memory looses due to some problems with the brain are related in this category. Amnesia and Alzheimer’s are the two main memory disorders causing us to forget. Amnesia is partial or total inability to recall or identify past experience.

Amnesia is an inability to lay down new memories, recall old memories, or both. It is the ‘disease of memory’. Alzheimer’s disease is one of the dementia in which the individual has deterioration of memory.