Concept, Types and Models of Memory in Psychology

Memory is the process by which we encode, store, and retrieve information. Memory is built on three basic processes- encoding, storage, and retrieval- that are analogous to a computer’s keyboard, hard drive, and software to access the information for display on the screen.

It is regarded as a special ability of our mind to conserve or store what has been previously experienced or acquired through learning and then, at some later stage to enable us to make use of its reproduction or revival. Memory denotes the ability or power of our mind to retain and reproduce our learning.

According to Melton(1963) learning has been referred to as trace formation, memory as trace storage, and transfer of training as trace utilization.

In the encoding stage, the sensory information is received and coded, or transformed into neural impulses. Encoding may even involve giving this information a special name or label. It is easier if the material are meaningful, presented in visual stimuli than with meaningless materials. There are two types of Encoding: Automatic encoding and effortful encoding.

2. Storage( Information saved for future use)

Storage is the second process in processing memory where encoded information is retained in the memory system. It has often been compared to a store house. The encoded experience recorded in the nervous system is called memory trace, neurogram, and engram.

We recall or bring a memory into consciousness, from among the stored materials. This process is known as retrieval process. Psychologist has distinguished three different ways of retrieving process that are stored: Recall method, Recognition method, and Relearning method.

Sensory memory refers to the initial, momentary storage of information that lasts only an instant. It is that memory which helps an individual to recall something a split second after having perceived it. It is needed when we want to remember a thing for a short time and then forget it.

Short-term memory holds information for 15to 25 seconds and stores it according to its meaning rather than as mere sensory stimulation. This types of memory is also temporary, thought not nearly as short-lived as the immediate memory. 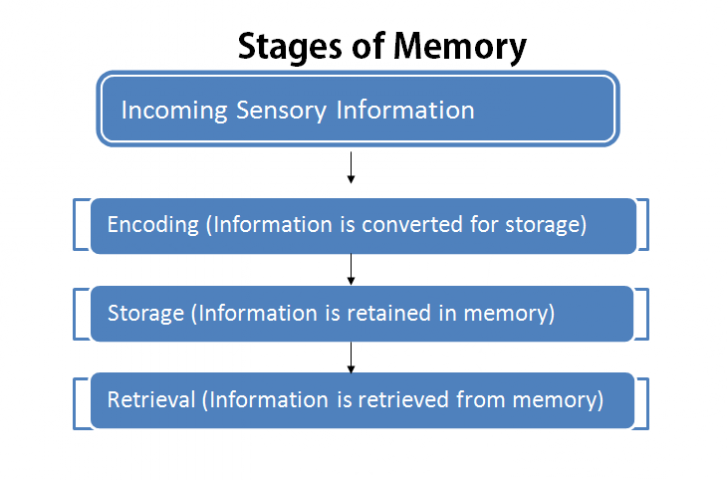 It is an example of a network model of memory. It is made up of neural networks that interact to store information. It is based on the idea that the brain does not function in a series of activities but rather performs a range of activities at the same time, parallel to each other.

It is a framework used by cognitive psychologists to explain and describe mental processes. The model likes the thinking process to how a computer works.