It supports the goal of the group and improves its performance. Here, people with differing points of view show mutual respect for each other’s idea, thoughts and feelings. This patterns develops cooperation and effective working relations, functional conflict mostly brings positive consequences.

It reduces group performance. In this pattern of conflict, people are more concerned above protecting themselves. It mostly brings negative consequences.

Conflict can occur at the following levels: 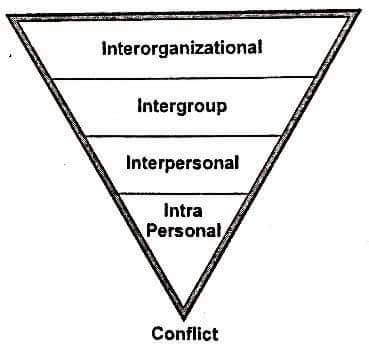 This conflict arises due to incompatibility of individual’s expected roles with his or her own values and beliefs. When a private business owner asks his secretary not to send any visitors into his private office, for an ethical secretary, it is difficult to tell visitors that his boss in not in the office. This is the conflict of expected role and personal values.

This conflict arises when there are clashes of interests between two or more individuals in the organization. A manager at the same level in organization competes with the other managers to be promoted for a post of executive director. This is an example of interpersonal conflict.

In some cases, although the individual belongs to a group, he or she may dislike the group’s operation style and thus conflicts arise. For example, the manage takes disciplinary action only against a member of a group. This may cause conflict between the individual and the group.