It is a functional relationship between two aggregates i.e., total consumption and National income. Consumption is an increasing function of income. It was developed by John Maynard Keynes

But increase in consumption is less than increase in income. It is known as Fundamental Psychological Law”.

Consumption Schedule It is the tabular representation of various amounts of consumption expenditure corresponding to different levels of income.

Consumption is basically of two types:

Autonomous Consumption: This is the level of consumption which does not depend on income. The argument is that even with zero income you still need to buy enough food to eat, through borrowing or running down savings.

Induced Consumption: This is that level of consumption which depends on income and varies at different level of income. When income increases, induced consumption also increases.

This function can be written as C= Ca + bY

By=Induced Consumption (b= Marginal Propensity to consume and Y= income) 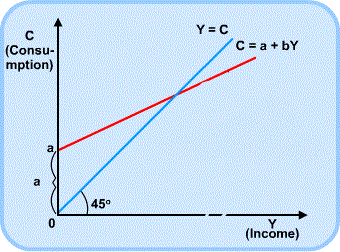 Propensity to consume is of two kinds:

Saving function may be defined as a schedule showing amounts that will be saved at different level of income. 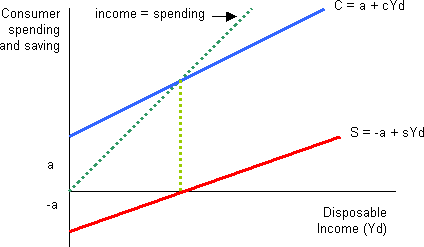 Average Propensity to Save: APS is the ratio between total saving (S) and total income (Y) at a given level of income and employment in the economy.