Here in this section of Data Mining and Data Warehousing Short Questions Answers, We have listed out some of the important Short Questions with Answers which will help students to answer it correctly in their University Written Exam.

1. What is the use of the knowledge base?

Knowledge base is domain knowledge that is used to guide search or evaluate the interestingness of resulting pattern.

Such knowledge can include concept hierarchies used to organize attribute /attribute values in to different levels of abstraction.

2. What is the Architecture of a typical data mining?

Architecture of a typical data mining is: 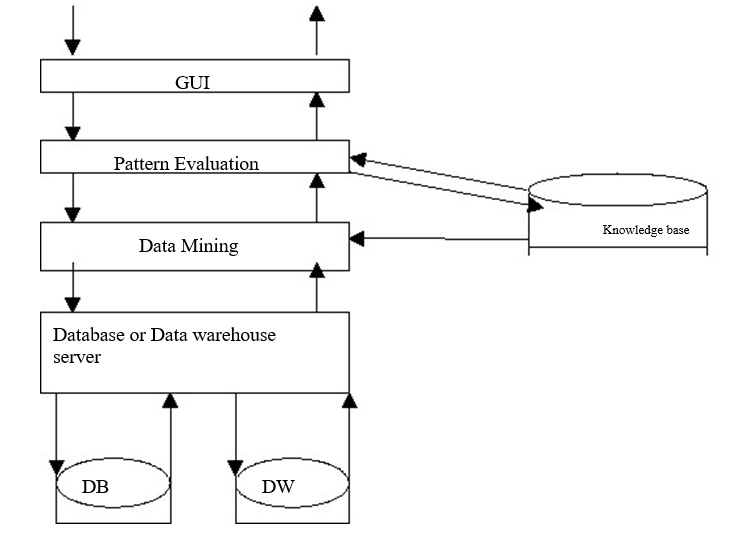 3. What are the some of the data mining techniques?

Some of the data mining are:

Some statistical techniques in data mining are:

5. What is meta learning?

Concept of combining the predictions made from multiple models of data mining and analyzing those predictions to formulate a new and previously unknown prediction.

6. What is Genetic algorithm?

Genetic algorithm enables us to locate optimal binary string by processing an initial random population of binary strings by performing operations such as artificial mutation , crossover and selection. it is a Search algorithm.

7. What is the purpose of Data mining Technique?

It provides a way to use various data mining tasks.

8. What is Predictive model?

Predictive model is used to predict the values of data by making use of known results from a different set of sample data.

Tasks that are belongs to predictive model are:

9. What is Descriptive model?

Descriptive model is used to determine the patterns and relationships in a sample data.

10. What are the advanced database systems?

11. What is Cluster Analysis?

Cluster analyses data objects without consulting a known class label. The class labels are not present in the training data simply because they are not known to begin with.

1. Based on the kinds of databases mined:

2. Based on kinds of Knowledge mined

3. Based on kinds of techniques utilized

4. Based on applications adopted

14. How is a data warehouse different from a database?

Data warehouse is a repository of multiple heterogeneous data sources, organized under a unified schema at a single site in order to facilitate management decision-making.

Database consists of a collection of interrelated data.

Support S is the percentage of transactions in D that contain AUB.

Confidence c is the percentage of transactions in D containing A that also contain B.

Based on types of values handled in the Rule

Based on the dimensions of data involved

Based on the levels of abstraction involved

Based on various extensions

17. What is the purpose of Apriori Algorithm?

18. How to generate association rules from frequent item sets?

Association rules can be generated as follows:

For each frequent item set1, generate all non empty subsets of 1.

Where min_conf is the minimum confidence threshold.

19. What are the techniques to improve the efficiency of Apriori algorithm?

Techniques to improve the efficiency of Apriori algorithm

Apriori algorithm was the first algorithm that was proposed for frequent itemset mining. It was later improved by R Agarwal and R Srikant and came to be known as Apriori. This algorithm uses two steps “join” and “prune” to reduce the search space. It is an iterative approach to discover the most frequent itemsets.

The probability that item I is not frequent is if:

The steps followed in the Apriori Algorithm of data mining are:

20. What is Clustering and Cluster Analysis?

Clustering is a process of grouping the physical or conceptual data object into clusters.

What do you mean by Cluster Analysis?

A cluster analysis is the process of analyzing the various clusters to organize the different objects into meaningful and descriptive objects.

21. What are the fields in which clustering techniques are used?

22. What are the requirements of cluster analysis?

The basic requirements of cluster analysis are:

23. What are the different types of data used for cluster analysis?

The different types of data used for cluster analysis are:

24. What are interval scaled variables?

For example, height and weight, weather temperature or coordinates for any cluster. These measurements can be calculated using Euclidean distance or Minkowski distance.

In Nominal variables the total number of states is N and it is denoted by letters, symbols or integers.

1. An ordinal variable also has more than two states but all these states are ordered in a meaningful sequence.

2. A ratio scaled variable makes positive measurements on a non-linear scale, such as exponential scale, using the formula

Where A and B are constants.

27. What do u mean by partitioning method?

The two types of partitioning method are

28. What is CLARA and CLARANS?

Clustering in LARge Applications is called as CLARA. The efficiency of CLARA depends upon the size of the representative data set.

To recover this drawback a new algorithm, Clustering Large Applications based upon RANdomized search (CLARANS) is introduced.

The CLARANS works like CLARA, the only difference between CLARA and CLARANS is the clustering process that is done after selecting the representative data sets.

29. What is Hierarchical method?

Hierarchical method groups all the objects into a tree of clusters that are arranged in a hierarchical order. This method works on bottom-up or top-down approaches.

Divisive Hierarchical clustering method works on the top-down approach. In this method all the objects are arranged within a big singular cluster and the large cluster is continuously divided into smaller clusters until each cluster has a single object.

If an on-line operational database systems is used for efficient retrieval, efficient storage and management of large amounts of data, then the system is said to be on-line transaction processing.

Data warehouse systems serves users (or) knowledge workers in the role of data analysis and decision-making. Such systems can organize and present data in various formats. These systems are known as on-line analytical processing systems.

35. What does audio data mining mean?

Uses audio signals to indicate patterns of data or the features of data mining results.

Patterns are transformed into sound and music.

To identify interesting or unusual patterns by listening pitches, rhythms, tune and melody.

36. Explain the types of data mining.

types of data mining are:

37. How data mining is used in banking industry?

38. How data mining is used in health care analysis?

Health care data mining and its aims are:

39. What are the DB Miner tool in data mining?

40. What is spatial data mining?

Spatial data: Data that is associated with a location Used in several fields such as geography, geology, medical imaging etc.

42. What are the factors involved while choosing data mining system?

The factors involved while choosing data mining system are:

It was proposed by Han, Fu, Wang, et al. for the DBMiner data mining system. Although, it was based on the structured Data Mining Query Language. These query languages are designed to support ad hoc and interactive data mining. Also, it provides commands for specifying primitives.

44. What are the areas in which data warehouses are used in present and in future?

The potential subject areas in which data ware houses may be developed at present and also in future are:

The registrar general and census commissioner of India decennially compiles information of all individuals, villages, population groups, etc. This information is wide ranging such as the individual slip.

A compilation of information of individual households, of which a database of 5%sample is maintained for analysis. A data warehouse can be built from this database upon which OLAP techniques can be applied, Data mining also can be performed for analysis and knowledge discovery

The ministry of food and civil supplies, Government of India complies daily data for about 300 observation centers in the entire country on the prices of essential commodities such as rice, edible oil etc.

45. What is the difference between generic single-task tools and generic multi-task tools?

They cover only the data mining part and require extensive pre-processing and post- processing steps.

46. What are Research prototypes?

Some of the research products may find their way into commercial market: ‘DB Miner’ from Simon Fraser University, British Columbia, ‘Mining Kernel System’ from University of Ulster, North Ireland.

If a database whose size is greater than 100GB, then the database is said to be very large database.

48. What is Virtual Warehouse?

49. What are dependent and independent data marts?

Independent data marts are data captured from one (or) more operational systems (or) external information providers (or) data generated locally with in particular department (or) geographic area.

What is Data Mart?

Data mart is a database that contains a subset of data present in a data warehouse.

Data marts are created to structure the data in a data warehouse according to issues such as hardware platforms and access control strategies.

Data marts are usually implemented on low-cost departmental servers that are UNIX (or) windows/NT based. The implementation cycle of the data mart is likely to be measured in weeks rather than months (or) years.

51. What is Enterprise Warehouse?

What is Enterprise Warehouse?

An enterprise warehouse collects all the information’s about subjects spanning the entire organization. It provides corporate-wide data integration, usually from one (or) more operational systems (or) external information providers.

It contains detailed data as well as summarized data and can range in size from a few giga bytes to hundreds of giga bytes, tera bytes (or) beyond.

An enterprise data warehouse may be implemented on traditional mainframes, UNIX super servers (or) parallel architecture platforms. It requires business modeling and may take years to design and build.

The hybrid OLAP approach combines ROLAP and MOLAP technology, benefiting from the greater scalability of ROLAP and the faster computation of MOLAP,(i.e.) a HOLAP server may allow large volumes of detail data to be stored in a relational database, while aggregations are kept in a separate MOLAP store.