Definition and Function of Endocrine System in Psychology

The endocrine system is the collection of glands that produce hormones that regulate metabolism, growth and development, tissue function, sexual function, reproduction, sleep, and mood, among other things.

Besides the nervous system, the human body also possesses a second major coordinating and controlling system for regulating its internal mechanisms in the name of Endocrine System.

The endocrine system is a network of glands and organs located throughout the body. It’s similar to the nervous system in that it plays a vital role in controlling and regulating many of the body’s functions.

Hormones and glands are the endocrine system’s foundations. Hormones act as the body’s chemical messengers, and they send information and instructions between sets of cells. Different types of hormones move through the bloodstream. Glands are groups of cells that produce and secrete chemicals. As Penn Medicine explains, they remove certain materials from the blood, process these materials and secrete a chemical product to be used in specific parts of the body.

Some examples of bodily functions that are controlled by the endocrine system include:

The glands of the endocrine system are where hormones are produced, stored, and released. Each gland produces one or more hormones, which go on to target specific organs and tissues in the body. 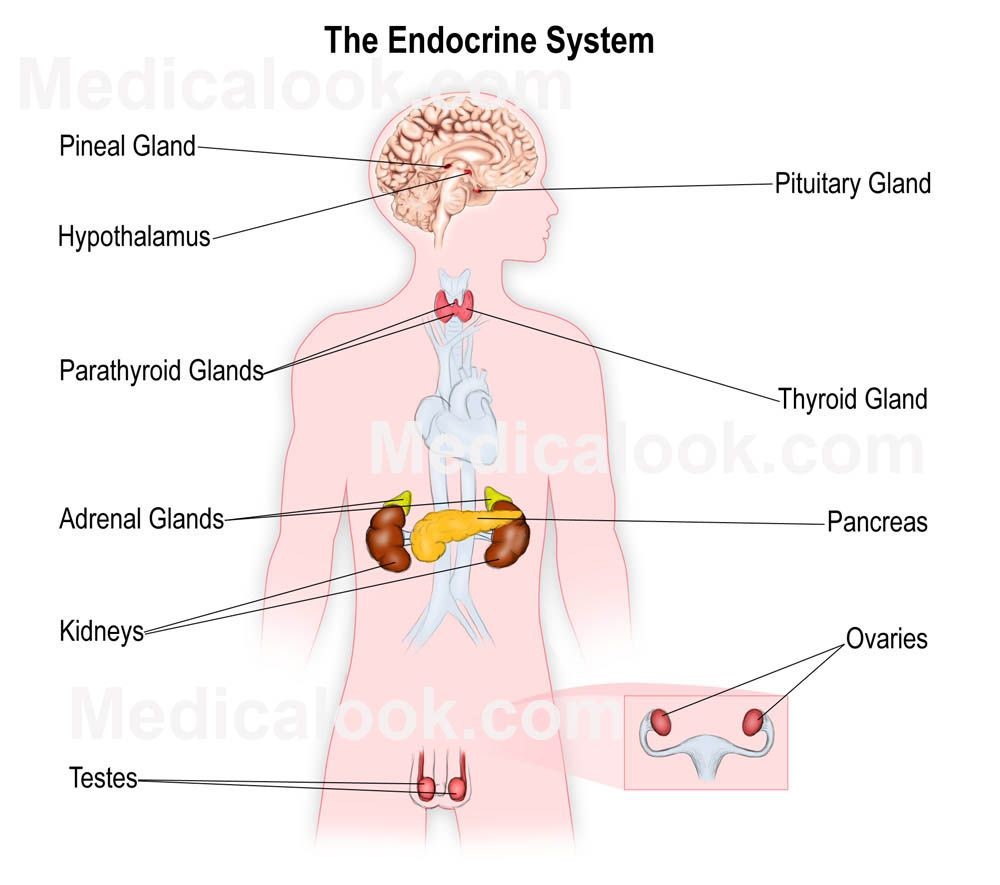 The glands of the endocrine system include:

While some people don’t consider it a gland, the hypothalamus produces multiple hormones that control the pituitary gland. It’s also involved in regulating many functions, including sleep-wake cycles, body temperature, and appetite. It can also regulate the function of other endocrine glands.

The pituitary gland is located below the hypothalamus. The hormones it produces affect growth and reproduction. They can also control the function of other endocrine glands.

This gland is found in the middle of your brain. It’s important for your sleep-wake cycles.

The thyroid gland is located in the front part of your neck. It’s very important for metabolism.

Also located in the front of your neck, the parathyroid gland is important for maintaining control of calcium levels in your bones and blood.

Located in the upper torso, the thymus is active until puberty and produces hormones important for the development of a type of white blood cell called a T cell.

One adrenal gland can be found on top of each kidney. These glands produce hormones important for regulating functions such as blood pressure, heart rate, and stress response.

The pancreas is located in your abdomen behind your stomach. Its endocrine function involves controlling blood sugar levels.