Definition and Techniques of Traffic Shaping

Traffic shaping is a mechanism to control the amount and the rate of traffic sent to the  network. Two techniques can shape traffic: leaky bucket and token bucket.

If a bucket has a small hole at the bottom, the water leaks from the bucket at a constant rate as long as there is water in the bucket. The rate at which the water leaks does not depend on the rate at which the water is input to the bucket unless the bucket is empty. The input rate can vary, but the output rate remains constant. Similarly, in networking, a technique called leaky bucket can smooth out burst traffic. Bursty chunks are stored in the bucket and sent out at an average rate. The figure shows a leaky bucket and its effects.

A simple leaky bucket implementation is shown in Figure. A FIFO queue holds the packets. If the traffic consists of fixed-size packets (e.g., cells in ATM networks), the process removes a fixed number of packets from the queue at each tick of the clock. If the traffic consists of variable-length packets, the fixed output rate must be based on the number of bytes or bits.

The following is an algorithm for variable-length packets:

A leaky bucket algorithm shapes bursty traffic into fixed-rate traffic by averaging the data rate. It may drop the packets if the bucket is full.

The leaky bucket algorithm described above, enforces a rigid pattern at the output stream, irrespective of the pattern of the input. For many applications it is better to allow the output to speed up somewhat when a larger burst arrives than to lose the data. Token Bucket algorithm provides such a solution. In this algorithm leaky bucket holds token, generated at regular intervals.

Main steps of this algorithm can be described as follows: ƒ

The token bucket algorithm is less restrictive than the leaky bucket algorithm, in a sense that it allows bursty traffic. However, the limit of burst is restricted by the number of tokens available in the bucket at a particular instant of time.

The implementation of basic token bucket algorithm is simple; a variable is used just to count the tokens. This counter is incremented every t seconds and is decremented whenever a packet is sent. Whenever this counter reaches zero, no further packet is sent out as shown in Figure (c). 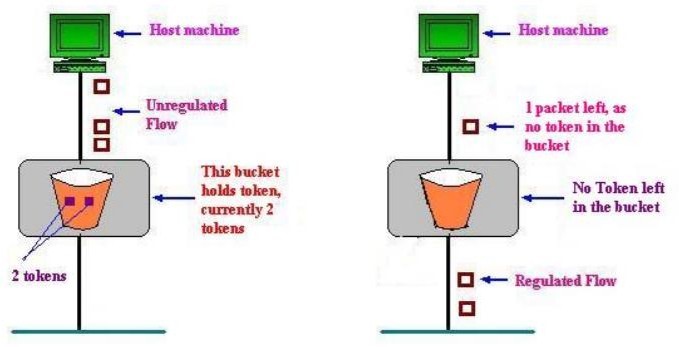 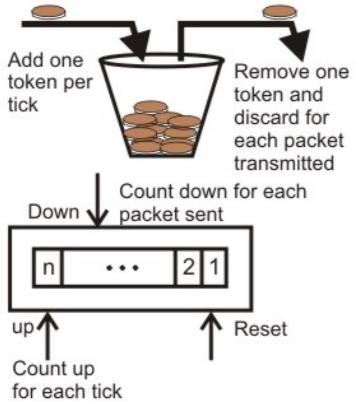 Admission control is one such closed-loop technique, where action is taken once congestion is detected in the network.

Different approaches can be followed: