Definition and Types of Congestion Control 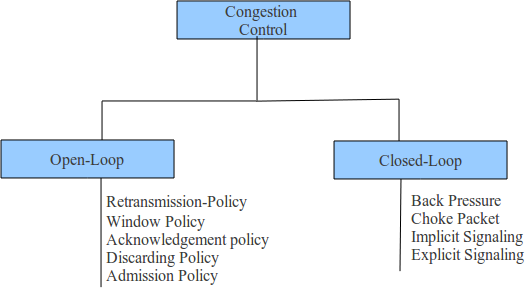 In   open-loop   congestion   control,   policies   are   applied    to    prevent    congestion before   it   happens.   In   these mechanisms, congestion control is handled by either the source or the destination.

The type of window at the sender may also affect congestion. The Selective Repeat window is better than the Go-Back-N window for congestion control. In the Go-Back- N window, when the timer for a packet times out, several packets may be resent, although some may have arrived safe and sound at the receiver. This duplication may make the congestion worse. The Selective Repeat window, on the other hand, tries to send the specific packets that have been lost or corrupted.

A good discarding policy by the routers may prevent congestion and at the same time may not harm the integrity of the transmission. For example, in audio transmission, if the policy is to discard less sensitive packets when congestion is likely to happen, the quality of sound is still preserved and congestion is prevented or alleviated.

Node III in the figure has more input data than it can handle. It drops some packets in its input buffer and informs node II to slow down. Node II, in turn, may be congested because it is slowing down the output flow of data. If node II is congested, it informs node I to slow down, which in turn may create congestion. If so, node I inform the source of data to slow down. This, in time, alleviates the congestion.

Backward Signaling: A bit can be set in a packet moving in the direction opposite to the congestion. This bit can warn the source that there is congestion and that it needs to slow down to avoid the discarding of packets.

Forward Signaling: A bit can be set in a packet moving in the direction of the congestion. This bit can warn the destination that there   is   congestion.   The receiver in this case can use policies, such as slowing down the acknowledgments, to alleviate the congestion.