Definitions and History of GIS

A geographic information system (GIS) is a computer-based system designed to capture, store, manipulate, analyze, manage, and present all types of spatial or geographical data.

GIS is a set of tools (or technology) that allow for the processing of spatial data into information. This set of tools is open ended, but will include data input, data storage, data manipulation, and a reporting system.

GIS lets us visualize, question, analyze, and interpret data to understand relationships, patterns, and trends. GIS benefits organizations of all sizes and in almost every industry. There is a growing interest in and awareness of the economic and strategic value of GIS

In a general sense, the term describes any information system that integrates, stores, edits, analyzes, shares, and displays geographic information. Information Systems allows the transformation of data into information via: structuring, formatting, conversion and modeling

Geographical Information System has been defined differently by different authors

In general it can be defined as a “computer-based system that support capture, management, manipulation, analysis, modeling, and display of spatially referenced data that provides planning, management, development and humanitarian solutions”.

The first known use of the term "geographic information system" was by Roger Tomlinson in the year 1968 in his paper "A Geographic Information System for Regional Planning". Tomlinson is also acknowledged as the "father of GIS". 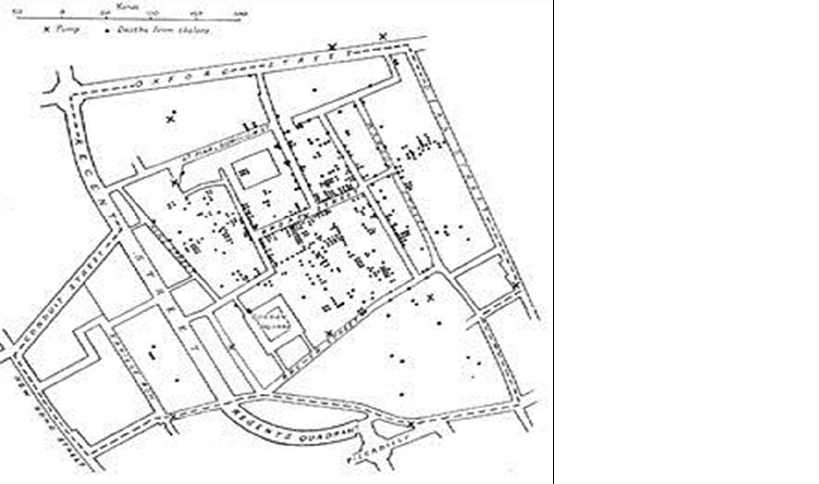 E.W. Gilbert's version (1958) of John Snow's 1855 map of the Soho cholera outbreak showing the clusters of cholera cases in the London epidemic of 1854

Previously, one of the first applications of spatial analysis in epidemiology is the 1832. The French geographer Charles Picquet represented the 48 districts of the city of Paris by halftone color gradient according to the percentage of deaths by cholera per 1,000 inhabitants.

In 1854 John Snow depicted a cholera outbreak in London using points to represent the locations of some individual cases, an early successful use of a geographic methodology in epidemiology. While the basic elements of topography and theme existed previously in cartography, the John Snow map was unique, using cartographic methods not only to depict but also to analyze clusters of geographically dependent phenomena.

The early 20th century saw the development of photozincography, which allowed maps to be split into layers, for example one layer for vegetation and another for water. This was particularly used for printing contours – drawing these was a labor-intensive task but having them on a separate layer meant they could be worked on without the other layers to confuse the draughtsman. This work was originally drawn on glass plates but later plastic film was introduced, with the advantages of being lighter, using less storage space and being less brittle, among others. When all the layers were finished, they were combined into one image using a large process camera. Once color printing came in, the layers idea was also used for creating separate printing plates for each color. While the use of layers much later became one of the main typical features of a contemporary GIS, the photographic process just described is not considered to be a GIS in itself – as the maps were just images with no database to link them to.

Computer hardware development spurred by nuclear weapon research led to general- purpose computer "mapping" applications by the early 1960s.The year 1960 saw the development of the world's first true operational GIS in Ottawa, Ontario, Canada by the federal Department of Forestry and Rural Development. Developed by Dr. Roger Tomlinson, it was called the Canada Geographic Information System (CGIS) and was used to store, analyze, and manipulate data collected for the Canada Land Inventory – an effort to determine the land capability for rural Canada by mapping information about soils, agriculture, recreation, wildlife, waterfowl, forestry and land use at a scale of 1:50,000. A rating classification factor was also added to permit analysis.

CGIS was an improvement over "computer mapping" applications as it provided capabilities for overlay, measurement, and digitizing/scanning. It supported a national coordinate system that spanned the continent, coded lines as arcs having a true embedded topology and it stored the attribute and locational information in separate files. As a result of this, Tomlinson has become known as the "father of GIS", particularly for his use of overlays in promoting the spatial analysis of convergent geographic data.

CGIS lasted into the 1990s and built a large digital land resource database in Canada. It was developed as a mainframe-based system in support of federal and provincial resource planning and management. Its strength was continent-wide analysis of complex datasets. The CGIS was never available commercially.

In 1964 Howard T. Fisher formed the Laboratory for Computer Graphics and Spatial Analysis at the Harvard Graduate School of Design (LCGSA 1965–1991), where a number of important theoretical concepts in spatial data handling were developed, and which by the 1970s had distributed seminal software code and systems, such as SYMAP, GRID, and ODYSSEY – that served as sources for subsequent commercial development—to universities, research centers and corporations worldwide.

In 1986, Mapping Display and Analysis System (MIDAS), the first desktop GIS product emerged for the DOS operating system. This was renamed in 1990 to MapInfo for Windows when it was ported to the Microsoft Windows platform. This began the process of moving GIS from the research department into the business environment.

By the end of the 20th century, the rapid growth in various systems had been consolidated and standardized on relatively few platforms and users were beginning to explore viewing GIS data over the Internet, requiring data format and transfer standards. More recently, a growing number of free, open-source GIS packages run on a range of operating systems and can be customized to perform specific tasks. Increasingly geospatial data and mapping applications are being made available via the world wide web.