The transfer of data between the peripheral and memory without the interaction of CPU and letting the peripheral device manage the memory bus directly is termed as Direct Memory Access (DMA).

The two control signals Bus Request and Bus Grant are used to fascinate the DMA transfer. The bus request input is used by the DMA controller to request the CPU for the control of the buses. When BR signal is high, the CPU terminates the execution of the current instructions and then places the address, data, read and write lines to the high impedance state and sends the bus grant signal. The DMA controller now takes the control of the buses and transfers the data directly between memory and I/O without processor interaction. When the transfer is completed, the bus request signal is made low by DMA. In response to which CPU disables the bus grant and again CPU takes the control of address, data, read and write lines.

The transfer of data between the memory and I/O of course facilitates in two ways which are DMA Burst and Cycle Stealing.

DMA Burst: The block of data consisting a number of memory words is transferred at a time.

Cycle Stealing: DMA transfers one data word at a time after which it must return control of the buses to the CPU.

The DMA controller communicates with the CPU through the data bus and control lines. DMA select signal is used for selecting the controller, the register select is for selecting the register. When the bus grant signal is zero, the CPU communicates through the data bus to read or write into the DMA register. When bus grant is one, the DMA controller takes the control of buses and transfers the data between the memory and I/O.

The address register specifies the desired location of the memory which is incremented after each word is transferred to the memory. The word count register holds the number of words to be transferred which is decremented after each transfer until it is zero. When it is zero, it indicates the end of transfer. After which the bus grant signal from CPU is made low and CPU returns to its normal operation. The control register specifies the mode of transfer which is Read or Write. 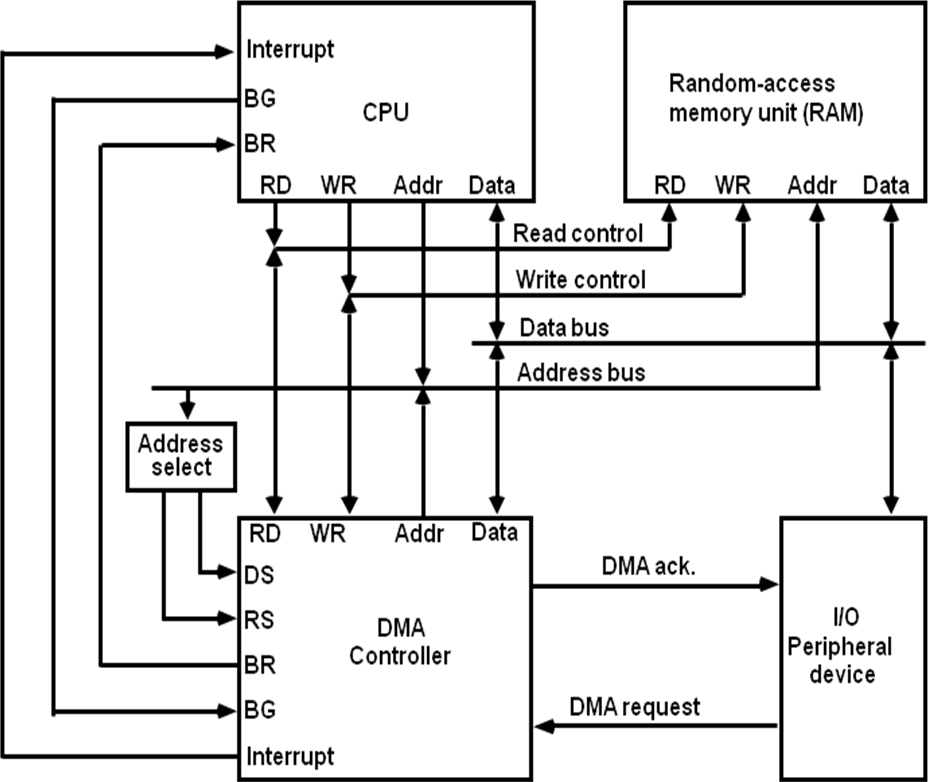