This model was introduced and formalized by Chen in 1976. It is one of the most popular data models for data conceptual modeling. It has three building blocks.

Entity types: They are similar to record types in the hierarchical or CODASYL model. The basic object that the ER model represents is an entity, which is a thing in the real world with an independent existence. An entity may be an object with a physical existence

(Ex: a particular person, car, house, or employee) or it may be an object with a conceptual existence

(Ex: a company, a job, or a university course. In other words, it represents a business concept with an unambiguous meaning to a particular set of users.Ex: A student, a product, a supplier, an employee

An entity type defines a collection of entities that have the same attributes and represent similar business concepts. Entities are said to be instances of that particular entity type.

Attribute types: Each entity has attributes, the particular properties that describe it. Ex: an EMPLOYEE entity may be described by the employee’s name, age, address, salary, and job. A particular entity will have a value for each of its attributes. The attribute values that describe each entity become a major part of the data stored in the database.

Several types of attributes occur in the ER model :

Attributes that are not divisible are called simple or atomic attributes.

In some cases an attribute can have a set of values for the same entity. Ex: Colors attribute for a car. Cars with one color have a single value; whereas two-tone cars have two color values. Similarly, one person may not have a college degree, another person may have one, and a third person may have two or more degrees. Such attributes are called multivalued. A multivalued attribute may have lower and upper bounds to constrain the number of values allowed for each individual entity. 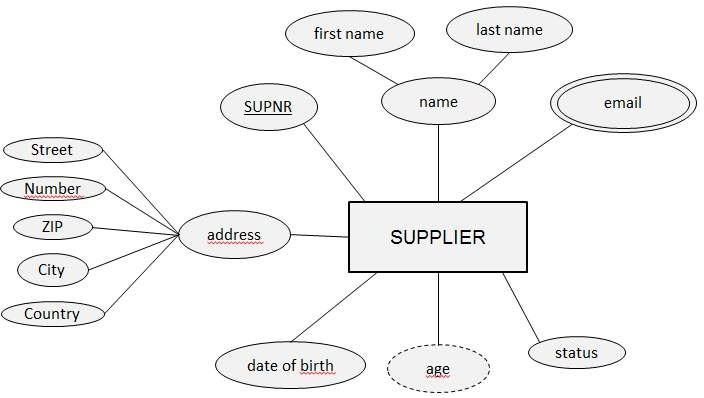 We have an entity type supplier. Entity types are represented as rectangles in ER models. Attribute types are represented using ellipses. Address is modeled as a composite attribute type consisting of Street, number, zip, city and country. SUPNR is underlined since it is the key attribute type. The dubble lined indicate that email is multivalued. The dash lined indicate that age it is a derived attirbute type calculated base on birth-date.

Relationship types are represented using a rumble symbol in the ER model. Basically the rhombus can be represented with two adjacent arrows pointing to each of the entity types.

The degree corresponds to the number of entity types participating in the relationship type.

Cardinality ratios specify the minimum/maximum number of relationship instances that an entity  can participate in.

The minimum cardinality can either be zero or one. If it is zero it implies that an entity can occur without being connected to another entity. This can be referred to as partial participation. In case the minimum cardinality is one, the entity must always be connected to at least one other entity. This is referred to as total participation or existence dependency since the existence of this entity depends on the existence of another.

For binary relationships, there are 4 options :

Ex: A hotel administration. Hotel has an HNR and Hotel name. Every hotel has a unique hotel number. Hence HNR is the key attribute. A room is identified by a room number and a number of beds. Within a particular hotel, each room has a unique room number but a room number can appear for multiple rooms being in different hotels. Hence RNR does not suffice the key attribute. The entity type room is therefore a weak entity type since it cannot produce its own attribute type. It needs to borrow HNR from hotel to come up with a key attribute type which is now a combination of RNR and HNR.

In contrast, regular entity types that do have a key attribute are called strong entity types.

The ER model has an attractive and user-friendly graphical notation. Hence, it has the ideal properties to build a conceptual scheme or model.

A domain specifies the set of values that may be assigned to an attribute for each individual entity. A domain gender can be specified as having only two values: male and female. A date domain allows finding dates as days, followed by months, followed by years. By convention, domains are not displayed in ER diagrams. A domain can also contain Null values, which means the value is not applicable, not relevant or not known. It is thus not the same as the value zero. Ex: domain email address which allows for null values in case the email address is not known.