Error vs Exception in Java

An Error indicates a serious problem that a reasonable application should not try to catch.

The exception indicates conditions that a reasonable application might try to catch. An exception (or exceptional event) is a problem that arises during the execution of a program. When an Exception occurs the normal flow of the program is disrupted and the program/Application terminates abnormally, which is not recommended, therefore, these exceptions are to be handled.

An exception can occur for many different reasons. Following are some scenarios where an exception occurs.

Some of these exceptions are caused by user error, others by programmer error, and others by physical resources that have failed in some manner. Based on these, we have three categories of Exceptions. You need to understand them to know how exception handling works in Java.

Errors - These are not exceptions at all, but problems that arise beyond the control of the user or the programmer. Errors are typically ignored in your code because you can rarely do anything about an error. For example, if a stack overflow occurs, an error will arise. They are also ignored at the time of compilation. 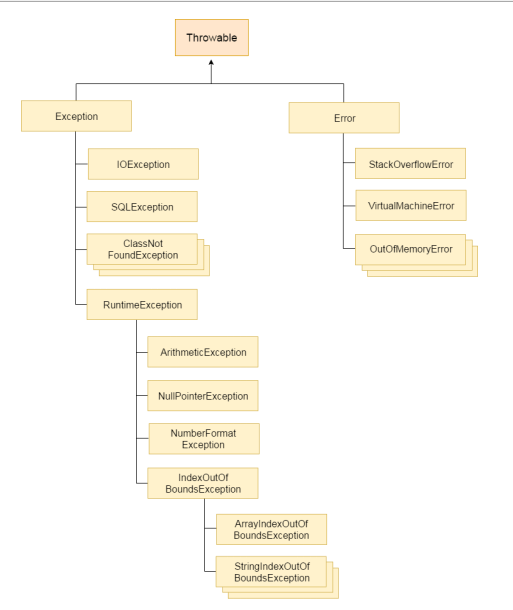 There are 5 keywords that are used in handling exceptions in Java.

Let's see an example of Java Exception Handling where we using a try-catch statement to handle the exception.

Exception in thread main java.lang.ArithmeticException:/ by zero
rest of the code...