The introduction and continued use of mainframes. Mainframes were the first powerful computers that could provide time sharing, multi tasking, and virtual memory, and became powerful enough to support thousands of remote terminals. The mainframe era was a period of highly centralized computing controlled by programmers and system operators. In this era dumb terminals were normally connected with centralized computing facilities. Minicomputers are, powerful yet less expensive computers, began to change this pattern, allowing decentralized computing customizable to individual departments or business units. It‘s interesting to note that IBM began this era and remains the sole supplier of mainframe computing. Although the experts and pundits predicted the death of mainframes in the mid-1980s, they have evolved and remain a strong, viable component in many IT infrastructures because of their ability to store and process huge amounts of data and transmissions 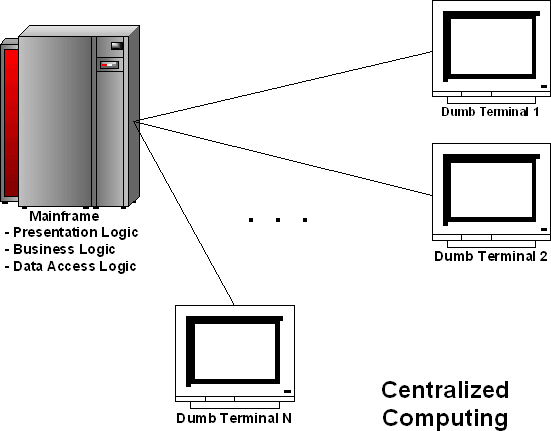 The appearance of the IBM PC in 1981 is usually considered the beginning of the PC era. Advances developed for personal computers in the home have given rise to much of the advances in corporate computing in the last 25 years. As the home 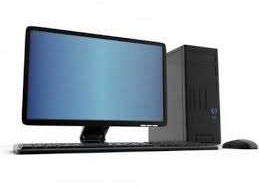 user became more comfortable with using computers, and more applications were developed for personal computers, employees demanded increased use of computers in the workplace. While the Wintel PC standard has dominated this era, open-source software is starting to put a big dent into that stronghold.

In client/server computing, desktop or laptop computers called clients are networked to server computers that provide the clients with services and capabilities. Computer processing work is split between these two types of machines. The client is the user point of entry, whereas the server typically processes and stores shared data, serves up Web pages, or manages network activities. The term server refers to both the software application and the physical computer on which the network software runs. The server could be a mainframe, but today server computers typically are more powerful versions of personal computers. In two-tiered client/server architecture, a client computer is networked to a server with processing split between the two. In multi-tiered (N- tier) client/server architecture, the work of the entire network is balanced over several different levels of servers. Distributing work across a number of smaller inexpensive machines cost much less than minicomputers or mainframes. 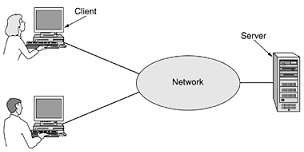 The Internet networking technology Transmission Control Protocol/Internet Protocol (TCP/IP) suite enables enterprises to link disparate devices and local area networks (LANs) into single enterprise-wide networks. Integrated computing environments allows for much faster and seamless gathering and distribution of data. Perhaps no other era has seen the explosive growth in functionality and popularity as this era. The problems created by proprietary, closed systems are being solved by the standards and open-source software created in this era. 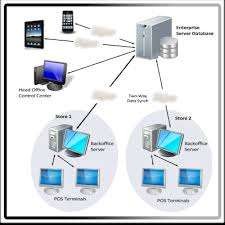 Cloud computing is defined as a type of computing that relies on sharing computing resources rather than having local servers or personal devices to handle applications. Cloud computing enables companies to consume compute

resources as a utility -- just like electricity -- rather than having to build and maintain computing infrastructures in-house. Cloud computing promises several attractive benefits for businesses and end users. Three of the main benefits of cloud computing includes:

® Self-service Provisioning: End users can spin up computing resources for almost any type of workload on-demand.

® Elasticity: Companies can scale up as computing needs increase and then scale down again as demands decrease.

® Pay per use: Computing resources are measured at a granular level, allowing users to pay only for the resources and workloads they use.