all of which are intended to provide a formal description of concepts, terms, and relationships within a given knowledge domain, Logic, Proof, and Trust. 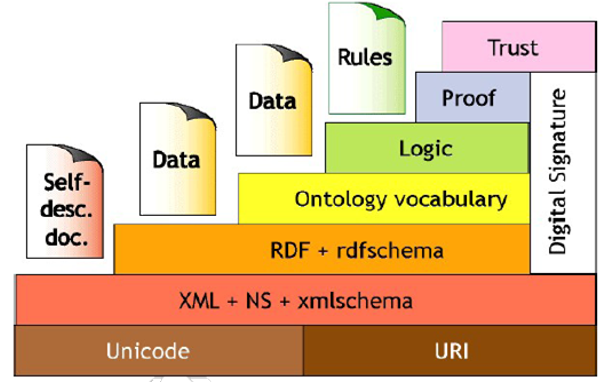 To identify items on the Web, we use identifiers. Because we use a uniform system of identifiers, and because each item identified is considered a "resource," we call these identifiers "Uniform Resource Identifiers" or URIs for short.

We can give a URI to anything, and anything that has a URI can be said to be "on the Web": you, the book you bought last week, the fly that keeps buzzing in your ear and anything else you can think of -- they all can have a URI.

XML was designed to be a simple way to send documents across the Web. It allows anyone to design their own document format and then write a document in that format.

These document formats can include a markup to enhance the meaning of the Semantic Web document's content. This markup is "machine-readable," that is, programs can read and understand it.

By including machine-readable meaning in our documents, we make them much more powerful.

For Example: I just got a new pet dog.

As far as our computer is concerned, this is just text. It has no particular meaning to the computer. But now consider this same passage marked up using an XML-based markup language (we'll make one up for this example):

Putting information into RDF files makes it possible for computer programs ("web spiders") to search, discover, pick up, collect, analyze, and process information from the web.

The Semantic Web uses RDF to describe web resources. RDF provides a model for data, and syntax so that independent parties can exchange and use it. It is designed to be read and understood by computers. It is not designed for being displayed to people.

For Example: Let's look at a simple RDF statement:

A "schema" (plural "schemata") is simply a document or piece of code that controls a set of terms in another document or piece of code. It's like a master checklist or definition grammar. A schema is a way to describe the meaning and relationships of terms. This description (in RDF, of course) helps computer systems use terms more easily, and decide how to convert between them.

RDF Schema: RDF Schema was designed to be a simple data typing model for RDF. Using RDF Schema, we can say that "Fido" is a type of "Dog", and that "Dog" is a subclass of the animal. We can also create properties and classes, as well as doing some slightly more "advanced" stuff such as creating ranges and domains for properties.

A solution to this problem is provided by the third basic component of the Semantic Web, collections of information called ontologies.

In philosophy, an ontology is a theory about the nature of existence, of what types of things exist; ontology as a discipline studies such theories.

Artificial-intelligence and Web researchers have co-opted the term for their own jargon, and for them, an ontology is a document or file that formally defines the relations among terms.

An ontology is an explicit description of a domain. It includes

An ontology defines a common vocabulary, a shared understanding. The most typical kind of ontology for the Web has a taxonomy and a set of inference rules.

We can express a large number of relations among entities by assigning properties to classes and allowing subclasses to inherit such properties. If city codes must be of type city and cities generally have Web sites, we can discuss the Web site associated with a city code even if no database links a city code directly to a Web site.

Inference Rule: Inference rules allow to infer conclusions based on rules and facts available in the knowledge base. So this increases the power of the Semantic web even more.

For example An ontology may express the rule "If a city code is associated with state code, and an address uses that city code, then that address has the associated state code."

A program could then readily deduce, for instance, that a Cornell University address, being in Ithaca, must be in New York State, which is in the U.S., and therefore should be formatted to U.S. standards.

The computer doesn't truly "understand" any of this information, but it can now manipulate the terms much more effectively in ways that are useful and meaningful to the human user.

Once we begin to build systems that follow the logic, it makes sense to use them to prove things. People all around the world could write logic statements. Then your machine could follow these Semantic "links" to construct proofs.

For Example Corporate sales records show that Jane has sold 55 widgets and 66 sprockets. The inventory system states that widgets and sprockets are both different company products.

The computer puts all these logical rules together into proof that Jane is a Super Salesman.

Now we can say that this whole plan is great, but rather useless if anyone can say anything. Who would trust such as system? That's where Digital Signature comes in.

Based on work in mathematics and cryptography, digital signatures provide proof that a certain person wrote (or agrees with) a document or statement. So one digitally sign all of their RDF statements.

That way, we can be sure that he wrote them (or at least vouch for their authenticity). Now, we can simply tell our program whose signatures to trust and whose not to.

Each can set their own levels of trust (or paranoia) the computer can decide how much of what it reads to believe.