A well-known fixed priority algorithms is the rate monotonic algorithms. The algorithm assigns priorities to task based on their periods as shorter period have higher priority. The rate (of job release) of a task is inverse of periods that means higher rate gets higher priority.

So the priority be assign as T1>T2>T3

The schedule table be constructed as:

The required schedule be constructed as:

According to DM priority be assigned as T2> T3 >T1 The schedule table be constructed as:

Corresponding Schedule be constructed as: 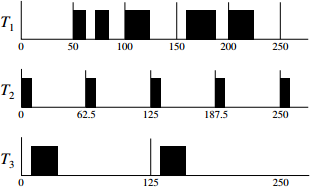 The EDF algorithms assigns priorities to individual’s job in the tasks according to their absolute deadlines. EDF algorithms is a task level dynamic priority algorithm.

For example: consider a system with task

The schedule table be constructed as:

Corresponding Schedule be constructed as:

A well-known dynamic priority algorithms is least slack time. It assigns the priorities to individual jobs in the task according to slack time. If d be the deadline, e be the execution time then at time t slack time be equals to d-e-t.

The scheduler checks the slack of all ready jobs at each time a new job is released and orders the new and existing jobs in accordance with slack time as smaller slack have the higher priority.

For example: consider a system with two jobs:

Here T1> T2, the job J11 is completely executes in between time 0 and 1 then J21 inters into the execution.

Here T1>T2, the job J12 is preempted and J12 enters into the execution and released at 3. The job J21 resumed for execution after time 3.

The corresponding schedule table be constructed as:

The required schedule is:

In this approach, the priority order is only changed only when the new job is released or any job finishes its execution such that there is no follow of LST algorithms at any time. This type of priorities is non strict and corresponding algorithms is called non strict LST algorithms otherwise it is called strict algorithms. In case of strict approach, scheduler follow the LST rule during the change of slack at any time and updates the job list of queue according to change of priority.

Here J21 gets higher priority than J12. Due to continuous observation and computation of slacks at each period of time, strict LST algorithms suffers from run-time overhead.

First in, first out (FIFO):