First, we take up the geometric mean. Geometric mean is defined at the nth root of the product of n observations of a distribution. 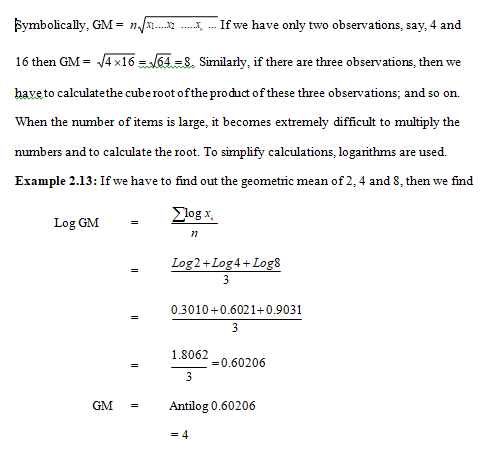 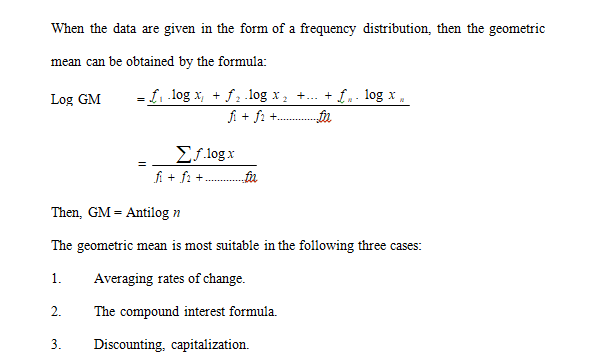 Example 1: A person has invested Rs 5,000 in the stock market. At the end of the first year the amount has grown to Rs 6,250; he has had a 25 percent profit. If at the end of the second year his principal has grown to Rs 8,750, the rate of increase is 40 percent for the year. What is the average rate of increase of his investment during the two years?

Example 2: We can also derive a compound interest formula from the above set of data. This is shown below:

Where P2 is the value of investment at the end of the second year, P0 is the initial investment and r is the rate of increase in the two years.

This, in fact, is the familiar compound interest formula. This can be written in a generalised form as Pn = P0(1 + r)n. In our case Po is Rs 5,000 and the rate of increase in investment is 32.3 percent. Let us apply this formula to ascertain the value of Pn, that is, investment at the end of the second year.

It may be noted that in the above example, if the arithmetic mean is used, the resultant figure will be wrong. In this case, the average rate for the two years is 25 + 40 percent 2 per year, which comes to 32.5.

This is obviously wrong, as the figure should have been Rs 8,750.

The compound interest formula given above was

This may be expressed as follows:

If the future income is Pn rupees and the present rate of interest is 100 r percent, then the present value of P n rupees will be P0 rupees. For example, if we have a machine that has a life of 20 years and is expected to yield a net income of Rs 50,000 per year, and at the end of 20 years it will be obsolete and cannot be used, then the machine's present value is

This process of ascertaining the present value of future income by using the interest rate is known as discounting.

In conclusion, it may be said that when there are extreme values in a series, geometric mean should be used as it is much less affected by such values. The arithmetic mean in such cases will give misleading results.

Before we close our discussion on the geometric mean, we should be aware of its advantages and limitations.

In view of the limitations mentioned above, the geometric mean is not frequently used.