It is therefore common to see the geographical phenomenon of spatial features in terms of field, objects, and boundary- boundaries simply define the extent of interest. i.e Geographic phenomenon= Field, Object, Boundary

The primitives that are used to represent features in the object view comprise point, line, area/polygon, and volume items. It is often called the vector-based approach

In the field view, the part of space relevant to us is divided up completely into regular or irregular tessellations—usually squares, triangles, or cubes—that define a two- or three-dimensional raster or grid. The more common name for the field view approach is the raster-based approach

A GIS deals with spatial data (e.g., parcels, rivers, wells,), their attributes and characteristics (e.g., location, area, length, name, depth …), and the relationships between the objects (e.g., a parcel boundary follows a river, a well is located in a certain parcel …). The objects are stored in the database with geometric primitives (volumes, areas, lines, and points) and the relationships between them (topology). Spatial data have the following characteristics:

It is common to equate GIS Data with three “triplex” characteristics- description, reference, and time). A description is an attribute, reference is the spatial reference/data, and time as the reference and description may change over time.

The basic data type in a GIS reflects traditional data found on a map and is currently digitally in GIS or spatial databases. Accordingly, GIS technology utilizes two basic types of data. These are: spatial data (location and geometry), attribute data (descriptions), and spatial relationships

The coordinate location of a forestry stand would be spatial data, while the characteristics of that forestry stand, e.g. cover group, dominant species, crown closure, height, etc., would be attribute data.

Relationships (rules or behavior): topological relationships such as coincidence, adjacency, and connectivity.

Traditionally spatial data has been stored and presented in the form of a map. Three basic types of spatial data models have evolved for storing geographic data digitally. These are referred to as:

The following diagram reflects the two primary spatial data encoding techniques. These are vector and raster.

The data model represents a set of guidelines to convert the real world (called entity) to digitally and logically represented spatial objects consisting of attributes and geometry. 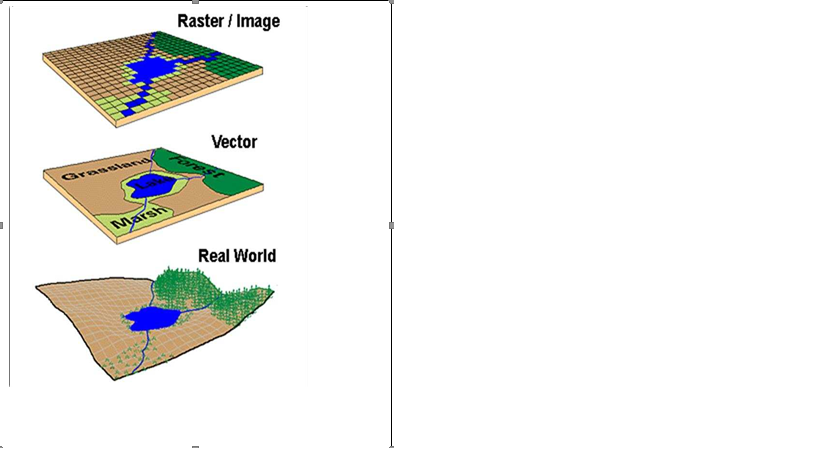