The calculation of harmonic mean becomes very tedious when a distribution has a large number of observations. In the case of grouped data, the harmonic mean is calculated by using the following formula:

Where n is the total number of observations.

Here, each reciprocal of the original figure is weighted by the corresponding frequency (f).

As against these advantages, there are certain limitations of the harmonic mean. First, it is difficult to understand as well as difficult to compute. Second, it cannot be calculated if any of the observations is zero or negative. Third, it is only a summary figure, which may not be an actual observation in the distribution.

Example 1: Suppose we have three observations 4, 8 and 16. We are required to calculate the harmonic mean. Reciprocals of 4,8 and 16 are:

Let us set up the table as follows: 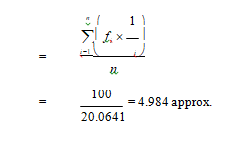 Example 2: In a small company, two typists are employed. Typist A types one page in ten minutes while typist B takes twenty minutes for the same.

Solution: Here Q-(i) is on arithmetic mean while Q-(ii) is on harmonic mean. 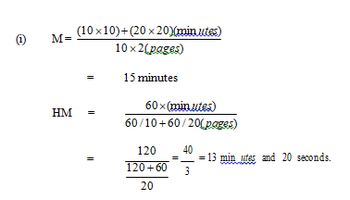 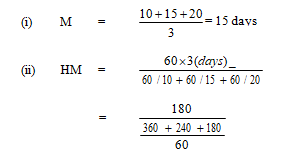