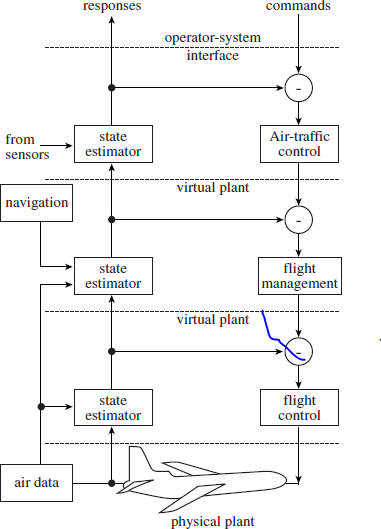 Figure shows a more complex example: the hierarchy of flight control, avionics, and air traffic control systems. The Air Traffic Control (ATC) system is at the highest level. It regulates the flow of flights to each destination airport. It does so by assigning to each aircraft an arrival time at each metering fix (or waypoint) en route to the destination: The aircraft is supposed to arrive at the metering fix at the assigned arrival time. At any time while in flight, the assigned arrival time to

the next metering fix is a reference input to the on-board flight management system. The flight management system chooses a time-referenced flight path that brings the aircraft to the next metering fix at the assigned arrival time. The cruise speed, turn radius, decent/accent rates, and so forth required to follow the chosen time-referenced flight path are the reference inputs to the flight controller at the lowest level of the control hierarchy.

While a digital controller deals with some dynamical behavior of the physical plant, a second level controller typically performs guidance and path planning functions to achieve a higher level goal. In particular, it tries to find one of the most desirable trajectories among all trajectories that meet the constraints of the system. The trajectory is most desirable because it optimizes some cost function(s). The algorithm(s) used for this purpose is the solution(s) of some constrained optimization problem(s).

As an example, we look again at a flight management system. The constraints that must be satisfied by the chosen flight path include the ones imposed by the characteristics of the aircraft, such as the maximum and minimum allowed cruise speeds and decent/accent rates, as well as constraints imposed by external factors, such as the ground track and altitude profile specified by the ATC system and weather conditions. A cost function is fuel consumption: A most desirable flight path is a most fuel efficient among all paths that meet all the constraints and will bring the aircraft to the next metering fix at the assigned arrival time. This problem is known as the constrained fixed- time, minimum-fuel problem. When the flight is late, the flight management system may try to bring the aircraft to the next metering fix in the shortest time. In that case, it will use an algorithm that solves the time-optimal problem.

The controller at the highest level of a control hierarchy is a command and control system. An Air Traffic Control (ATC) system is an excellent example. Figure 1–5 shows a possible architecture. The ATC system monitors the aircraft in its coverage area and the environment (e.g., weather condition) and generates and presents the information needed by the operators (i.e., the air traffic controllers). Outputs from the ATC system include the assigned arrival times to metering fixes for individual aircraft. As stated earlier, these outputs are reference inputs to on-board flight

management systems. Thus, the ATC system indirectly controls the embedded components in low levels of the control hierarchy. In addition, the ATC system provides voice and telemetry links to on-board avionics. Thus it supports the communication among the operators at both levels (i.e., the pilots and air traffic controllers).

The ATC system gathers information on the “state” of each aircraft via one or more active radars. Such radar interrogates each aircraft periodically. When interrogated, an air-craft responds by sending to the ATC system its “state variables”: identifier, position, altitude, heading, and so on. (In Figure 1–5, these variables are referred to collectively as a track record, and the current trajectory of the aircraft is a track.) The ATC system processes messages from aircraft and stores the state information thus obtained in a database. This information is picked up and processed by display processors. At the same time, a surveillance system continuously analyzes the scenario and alerts the operators whenever it detects any potential hazard (e.g., a possible collision).