Integrated Services Digital Network (ISDN) is a network that provides end-to-end digital connectivity to support a wide range of services including voice and data services. ISDN allows multiple digital channels to operate simultaneously through the same regular phone wiring used for analog lines, but ISDN transmits a digital signal rather than analog. Latency is much lower on an ISDN line than on an analog line.

The traditional PSTN was based on an analog connection between the customer premises and the local exchange, also called the local loop. The analog circuits introduce limitations on the bandwidth that can be obtained on the local loop. Circuit restrictions do not permit analog bandwidths greater than approximately 3000 Hz. ISDN technology permits the use of digital data on the local loop, providing better access speeds for the remote users. 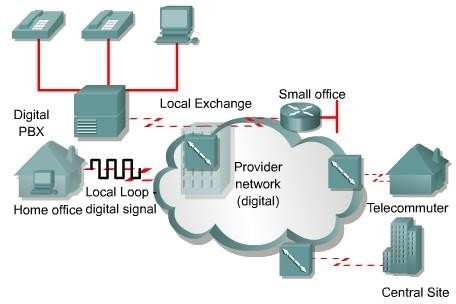 The bearer channel or B channel: B channel is defined as a clear digital path of 64 kbps for voice or up to 64 Kbps of data. It is said to be clear because it can be used to transmit any type of digitized data in full-duplex mode. For example, a digitized voice call can be transmitted on a single B channel.

Delta channel or D channel: The D channel carries signaling messages, such as call setup and teardown, to control calls on B channels. Traffic over the D channel employs the Link Access Procedure on the D Channel (LAPD) protocol. LAPD is a data link layer protocol based on HDLC. There can either be 16 kbps for the Basic Rate Interface (BRI) or 64 kbps for the Primary Rate Interface (PRI). The D channel is used to carry control information for the B channel. 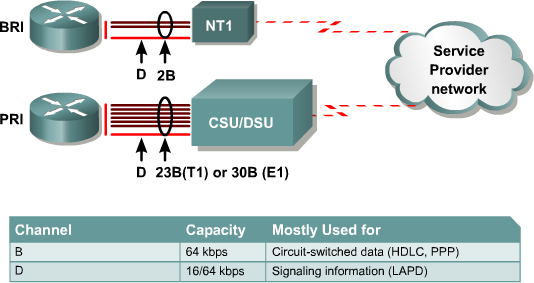 The ISDN BRI structure consists of two B-channels at 64Kbps and one D-channel for control at 16Kbps. The B-channel can carry either voice or data while the D-channel is used for signaling and can be used for packet data.

The capacity of the BRI is therefore:

BRI can carry a wide and flexible range of communications. A single BRI, for example, can carry two simultaneous voice or data conversations (to the same or different locations). The D-channel can also be used for packet communications to a third location, also simultaneously.

S: References the points that connect into the customer switching device Network Termination type 2 (NT2) and enables calls between the various types of customer premises equipment.

T: Electrically identical to the S interface, it references the outbound connection from the NT2 to the ISDN network or Network Termination type 1 (NT1).

U: References the connection between the NT1 and the ISDN network owned by the telephone company. 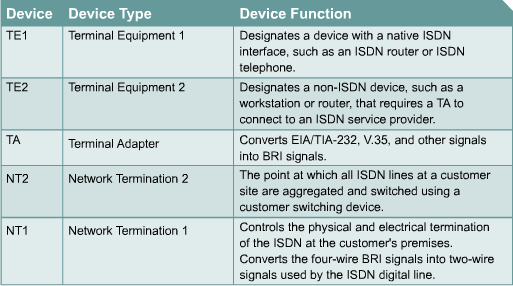