OB analyses the behavior of people through 3-levels. 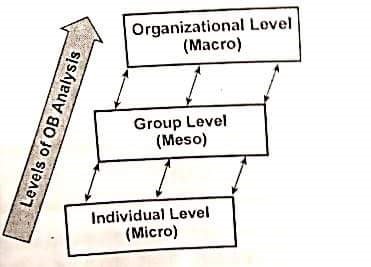 Individual (Meso) level analysis- Organizations is the purposeful association of individuals. The analysis of OB at individual level draws heavily on psychological theories of personality, perception, learning, motivation and job satisfaction. Factors such as values, beliefs and attitudes are also important for study of OB at this level.

Group (Meso) level analysis- The major contributing disciplines at this level are social psychology (concerned with group behavior, focuses on the influence of people on one another). The concepts of communication, power, conflict, team work and leadership styles are important for study of OB at group level.

Organizational (Macro) level analysis- Major contributing disciplines at this level are sociology (study of people in relation to their fellow human beings, role of individuals in social system), anthropology (study of societies and their culture, focuses on human beings and their activities and works), and political science (study of power and politics, the behavior of individuals and groups within a political environment). The concentration at this level is on how people structure their working relationships as well as on how organizations interact with their external environmental forces. 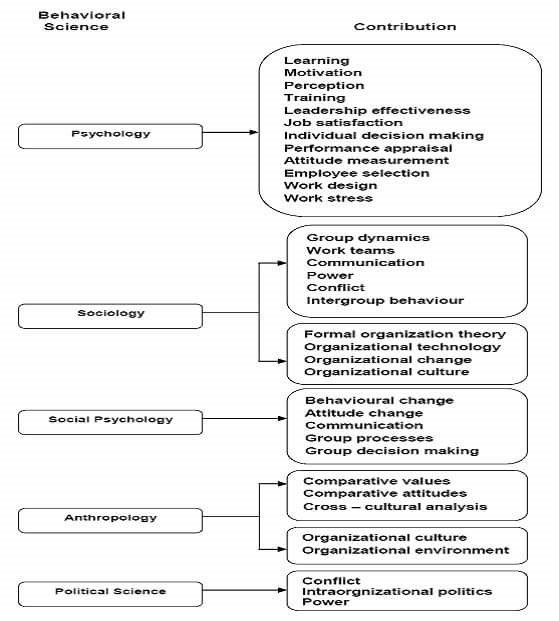 Psychology- It is concerned with individual behavior. It is the science that seeks to measure and explain the change in the behavior of individual. The contribution of psychology to OB has been through the theories of learning and others and also has been in the field of training, work stress and others.

Social psychology- It is concerned with group behavior. It focuses on the influence of people on one another. It is an area within psychology. It blends concepts from psychology and sociology. The level of analysis is group. Its contribution to OB has been in the areas of behavioral change, group decision making and others.

Political science- It is the study of power and politics, the behavior of individuals and groups within a political environment. Its contribution to OB at group level has been conflict, power and organization politics in the group.