The task of bringing out linear relationship consists of developing methods of fitting a straight line, or a regression line as is often called, to the data on two variables.

For purposes of illustration as to how a straight line relationship is obtained, consider the sample paired data on sales of each of the N = 5 months of a year and the marketing expenditure incurred in each month, as shown in Table 5-1

Before obtaining a straight-line relationship, it is necessary to discover whether the relationship between the two variables is linear, that is, the one which is best explained by a straight line. A good way of doing this is to plot the data on X and Y on a graph so as to yield a scatter diagram, as may be seen in Figure 5-1. A careful reading of the scatter diagram reveals that: 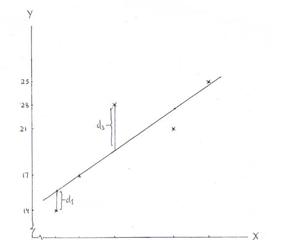 Fitting a Straight Line on the Scatter Diagram

As shown in Figure 5-1, if dl, d2,..., dN are the vertical deviations' of observed Y values from the straight line, fitting a straight line requires that

Free hand drawing is the simplest method of fitting a straight line. After a careful inspection of the movement and spread of various points on the scatter diagram, a straight line is drawn through these points by using a transparent ruler such that on the whole it is closest to every point. A straight line so drawn is particularly useful when future approximations of the dependent variable are promptly required.

Whereas the use of free hand drawing may yield a line nearest to the line of best fit, the major drawback is that the slope of the line so drawn varies from person to person because of the influence of subjectivity. Consequently, the values of the dependent variable estimated on the basis of such a line may not be as accurate and precise as those based on the line of best fit.

The least square method of fitting a line of best fit requires minimizing the sum of the squares of vertical deviations of each observed Y value from the fitted line. These deviations, such as d1 and d3, are shown in Figure 5-1 and are given by Y - Yc, where Y is the observed value and Yc the corresponding computed value given by the fitted line Yc = a + bX i for the ith value of X.

The straight line relationship in Eq.(5.1), is stated in terms of two constants a and b

Since a straight line is completely defined by its intercept a and slope b, the task of fitting the same reduces only to the computation of the values of these two constants. Once these two values are known, the computed Yc values against each value of X can be easily obtained by substituting X values in the linear equation. 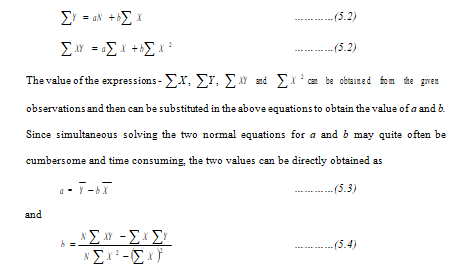 Instead of directly computing b, we may first compute value of a as 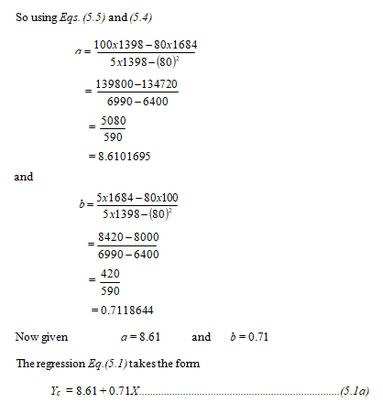 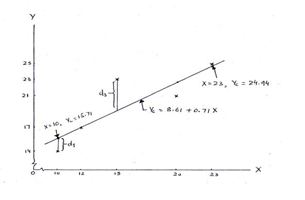 Then, to fit the line of best fit on the scatter diagram, only two computed Yc values are needed. These can be easily obtained by substituting any two values of X in Eq. (5.1a). When these are plotted on the diagram against their corresponding values of X, we get two points, by joining which (by means of a straight line) gives us the required line of best fit, as shown in Figure 5-2 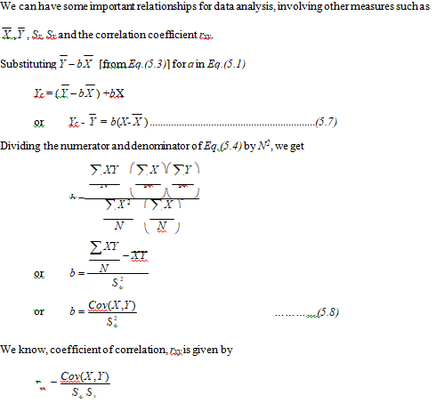 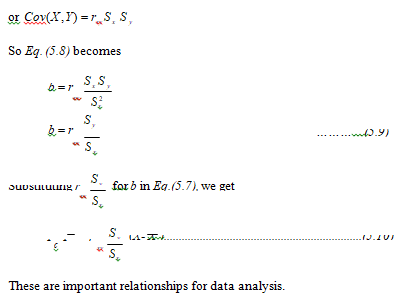 Predicting an Estimate and its Preciseness

The main objective of regression analysis is to know the nature of relationship between two variables and to use it for predicting the most likely value of the dependent variable corresponding to a given, known value of the independent variable. This can be done by substituting in Eq.(5.1a) any known value of X corresponding to which the most likely estimate of Y is to be found.

It may be appreciated that an estimate of Y derived from a regression equation will not be exactly the same as the Y value which may actually be observed. The difference between estimated Yc values and the corresponding observed Y values will depend on the extent of scatter of various points around the line of best fit.

The closer the various paired sample points (Y, X) clustered around the line of best fit, the smaller the difference between the estimated Yc and observed Y values, and vice-versa. On the whole, the lesser the scatter of the various points around, and the lesser the vertical distance by which these deviate from the line of best fit, the more likely it is that an estimated Yc value is close to the corresponding observed Y value.

The estimated Yc values will coincide the observed Y values only when all the points on the scatter diagram fall in a straight line. If this were to be so, the sales for a given marketing expenditure could have been estimated with l00 percent accuracy. But such a situation is too rare to obtain. Since some of the points must lie above and some below the straight line, perfect prediction is practically non-existent in the case of most business and economic situations.

This means that the estimated values of one variable based on the known values of the other variable are always bound to differ. The smaller the difference, the greater the precision of the estimate, and vice-versa. Accordingly, the preciseness of an estimate can be obtained only through a measure of the magnitude of error in the estimates, called the error of estimate.

Computation of Syx becomes little cumbersome where the number of observations N is large. In such cases Syx may be computed directly by using the equation: 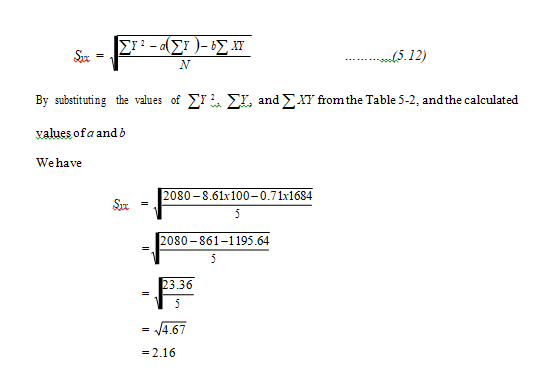 A careful observation of how the standard error of estimate is computed reveals the following:

Further, for the estimated value of sales against marketing expenditure of Rs 15 thousand being Rs 19.26 lac, one may like to know how good this estimate is. Since Syx is estimated to be Rs 2.16 lac, it means there are about 68 chances (68.27) out of 100 that this estimate is in error by not more than Rs 2.16 lac above or below Rs

REGRESSION LINE OF X ON Y 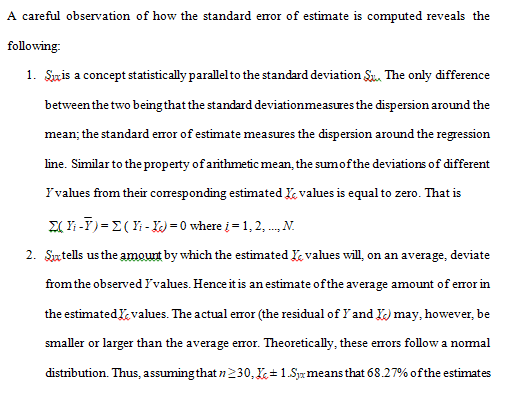 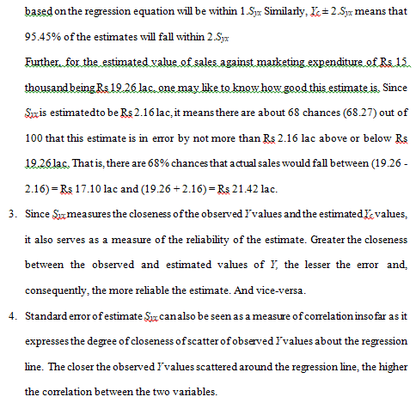 REGRESSION LINE OF X ON Y 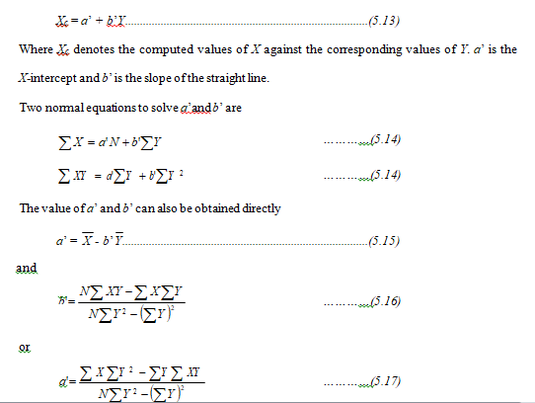 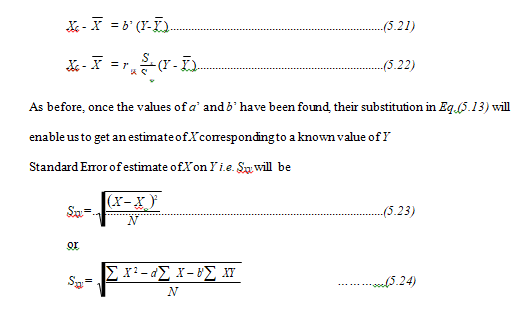 For example, if we want to estimate the marketing expenditure to achieve a sale target of Rs 40 lac, we have to obtain regression line of X on Y i. e. 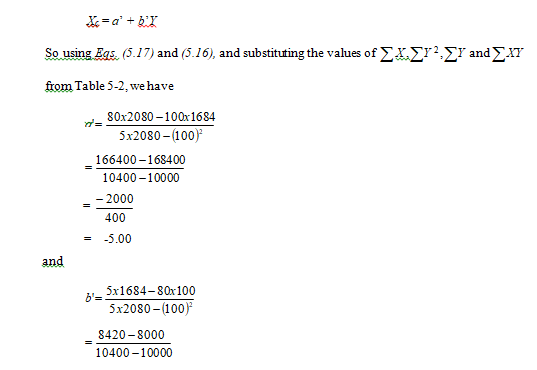 That is to achieve a sale target of Rs 40 lac, there is a need to spend Rs 37 thousand on marketing.