Linked List is a very commonly used linear data structure which consists of group of nodes in a sequence.

Each node holds its own data and the address of the next node hence forming a chain like structure.

Linked Lists are used to create trees and graphs.

There are 3 different implementations of Linked List available, they are:

Let's know more about them and how they are different from each other.

A linked list is a way to store a collection of elements. Like an array these can be character or integers. Each element in a linked list is stored in the form of a node.

A linked list is formed when many such nodes are linked together to form a chain. Each node points to the next node present in the order. The first node is always used as a reference to traverse the list and is called HEAD. The last node points to NULL.

The two links help us to traverse the list in both backward and forward direction. But storing an extra link requires some extra space.

First we define the node.

Now we define our class Doubly Linked List. It has the following methods:

i)  Insert Data in the beginning 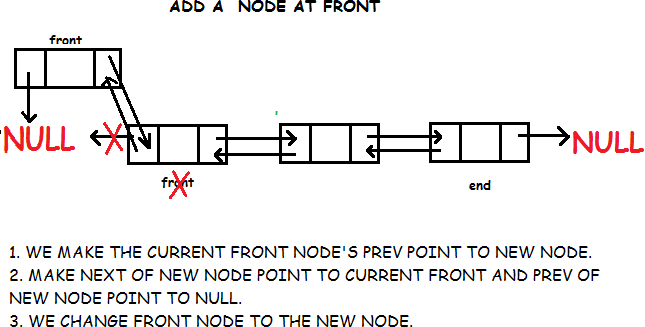 ii) Insert Data before a Node

iii) Insert Data after a Node

iv) Insert Data in the end 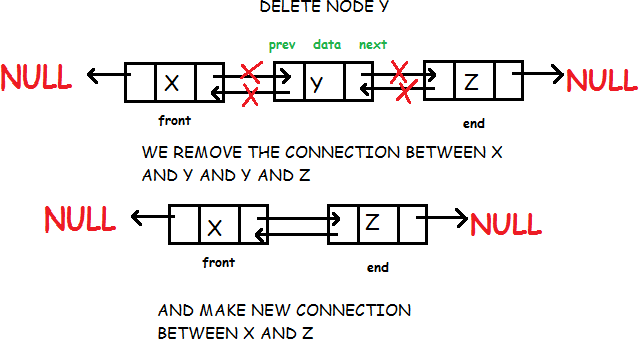 Start with the front node and visit all the nodes until the node becomes NULL.

Start with the end node and visit all the nodes until the node becomes NULL.

In circular linked list the last node of the list holds the address of the first node hence forming a circular chain.

So this will be oue Node class, as we have already studied in the lesson, it will be used to form the List.

i. Insertion at the Beginning

Steps to insert a Node at beginning:

ii. Insertion at the End

Steps to insert a Node at the end:

Deleting a node can be done in many ways, like we first search the Node with data which we want to delete and then we delete it. In our approach, we will define a method which will take the data to be deleted as argument, will use the search method to locate it and will then remove the Node from the List.

To remove any Node from the list, we need to do the following: