Many applications of fiber optic communication technology require networks in which a large number of users within local campus are interconnected in such a way that any user can access the network randomly to transit data to any other user. Such networks are called Local area networks (LANs).

Fiber optic cables are used in implementation of networks. Since the transmission distance is relatively short (less than 10 km), fiber losses are not at much concern for LAN Use of fiber optic offers a large bandwidth.

The commonly used topologies for LANs are – 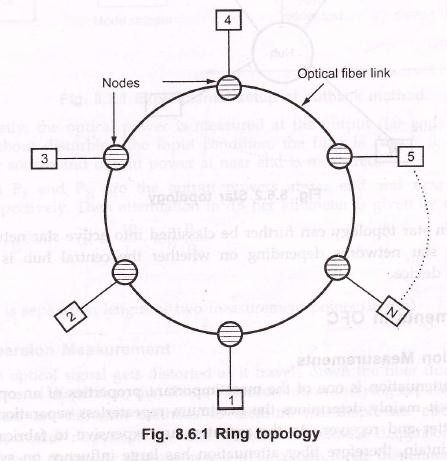 Each node can transmit and receive data by using a transmitter receiver pair. A token (predefined bit sequence) is passed around the ring. Each node monitors the bit stream to listen for its own address and to receive the

The use of ring topology for fiber optic LANs is known as fiber distributed data interface (FDDI). FDDI operates at 100 Mb/s with multimode fibers. It can provide backbone services g. interconnection of lower speed LAN.

In star topology, all nodes are connected through point-to-point link to central node called a hub. Fig. 8.6.2 shows star topology. 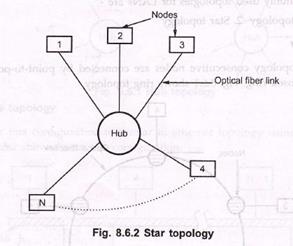