This measure of dispersion is graphical. It is known as the Lorenz curve named after Dr. Max Lorenz.

It is generally used to show the extent of concentration of income and wealth. The steps involved in plotting the Lorenz curve are:

The Lorenz curve is a simple graphical device to show the disparities of distribution in any phenomenon. It is, used in business and economics to represent inequalities in income, wealth, production, savings, and so on.

Figure 3.1 shows two Lorenz curves by way of illustration. The straight line AB is a line of equal distribution, whereas AEB shows complete inequality. Curve ACB and curve ADB are the Lorenz curves. 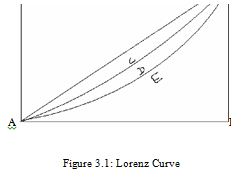 As curve ACB is nearer to the line of equal distribution, it has more equitable distribution of income than curve ADB. Assuming that these two curves are for the same company, this may be interpreted in a different manner.

Prior to taxation, the curve ADB showed greater inequality in the income of its employees. After the taxation, the company’s data resulted into ACB curve, which is closer to the line of equal distribution. In other words, as a result of taxation, the inequality has reduced.