A map projection tries to represent the curved (3-dimensional) Earth with all its features on a flat sheet of paper. This is very difficult as you can imagine, and even after hundreds of years there is no single projection that is able to represent the Earth perfectly for any area in the world.

Every projection has advantages and disadvantages. To be able to create maps as precisely as possible, people have studied, modified, and produced many different kinds of projections. In the end almost every country has developed its own map projection with the goal of improving the map accuracy for their territorial area.

With this in mind, we can now understand why it makes sense to add the name of the projection on a map. It allows the reader to see quickly, if one map can be compared with another. For example, features on a map in a so-called Equal Area projection appear very different to features projected in a Cylindrical Equidistant projection. Map projection is a very complex topic and we cannot cover it completely here. You may want to take a look at our Coordinate Reference Systems if you want to know more about it.

The world in different projections. A Mollweide Equal Area projection left, a Plate Carree Equidistant Cylindrical projection on the right.

Map projections try to portray the surface of the earth or a portion of the earth on a flat piece of paper or computer screen. A coordinate reference system (CRS) then defines, with the help of coordinates, how the two-dimensional, projected map in your GIS is related to real places on the earth. The decision as to which map projection and coordinate reference system to use, depends on the regional extent of the area you want to work in, on the analysis you want to do and often on the availability of data.

A traditional method of representing the earth’s shape is the use of globes. There is, however, a problem with this approach. Although globes preserve the majority of the earth’s shape and illustrate the spatial configuration of continent-sized features, they are very difficult to carry in one’s pocket. They are also only convenient to use at extremely small scales (e.g. 1:100 million).

Most of the thematic map data commonly used in GIS applications are of considerably larger scale. Typical GIS datasets have scales of 1:250 000 or greater, depending on the level of detail. A globe of this size would be difficult and expensive to produce and even more difficult to carry around. As a result, cartographers have developed a set of techniques called map projections designed to show, with reasonable accuracy, the spherical earth in two-dimensions.

When viewed at close range the earth appears to be relatively flat. However when viewed from space, we can see that the earth is relatively spherical. Maps, as we will see in the upcoming map production topic, are representations of reality. They are designed to not only represent features, but also their shape and spatial arrangement. Each map projection has advantages and disadvantages. The best projection for a map depends on the scale of the map, and on the purposes for which it will be used. For example, a projection may have unacceptable distortions if used to map the entire African continent, but may be an excellent choice for a large-scale (detailed) map of your country. The properties of a map projection may also influence some of the design features of the map. Some projections are good for small areas, some are good for mapping areas with a large East-West extent, and some are better for mapping areas with a large North-South extent.

The three families of map projections

The process of creating map projections can be visualised by positioning a light source inside a transparent globe on which opaque earth features are placed. Then project the feature outlines onto a two-dimensional flat piece of paper. Different ways of projecting can be produced by surrounding the globe in a cylindrical fashion, as a cone, or even as a flat surface. Each of these methods produces what is called a map projection family. Therefore, there is a family of planar projections, a family of cylindrical projections, and another called conical projections.

The three families of map projections. They can be represented by

Today, of course, the process of projecting the spherical earth onto a flat piece of paper is done using the mathematical principles of geometry and trigonometry. This recreates the physical projection of light through the globe. 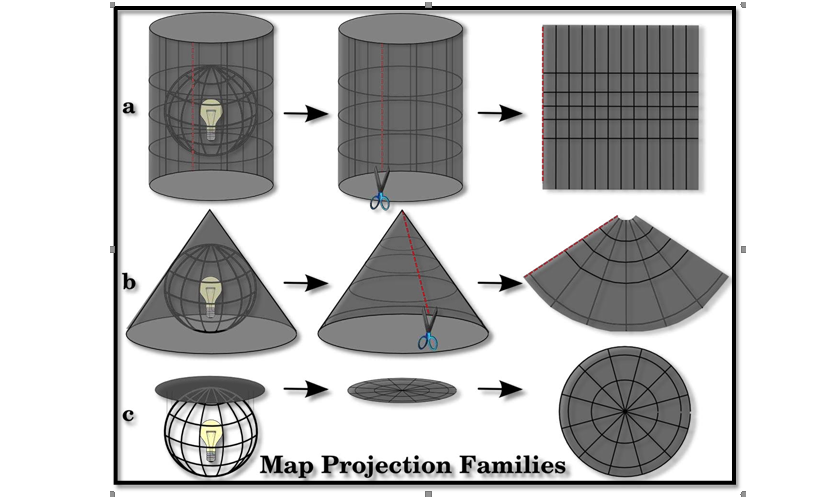