Meaning and Definitions of Dispersion

The various measures of central value give us one single figure that represents the entire data. But the average alone cannot adequately describe a set of observations, unless all the observations are the same.

It is necessary to describe the variability or dispersion of the observations. In two or more distributions the central value may be the same but still there can be wide disparities in the formation of distribution.

Measures of dispersion help us in studying this important characteristic of a distribution.

Some important definitions of dispersion are given below:

It is clear from above that dispersion (also known as scatter, spread or variation) measures the extent to which the items vary from some central value.

Since measures of dispersion give an average of the differences of various items from an average, they are also called averages of the second order. An average is more meaningful when it is examined in the light of dispersion.

The study of dispersion is of great significance in practice as could well be appreciated from the following example:

Since arithmetic mean is the same in all three series, one is likely to conclude that these series are alike in nature. But a close examination shall reveal that distributions differ widely from one another. In series A, (In Box-3.1) each and every item is perfectly represented by the arithmetic mean or in other words none of the items of series A deviates from the arithmetic mean and hence there is no dispersion.

In series B, only one item is perfectly represented by the arithmetic mean and the other items vary but the variation is very small as compared to series C.

In series C. not a single item is represented by the arithmetic mean and the items vary widely from one another. In series C, dispersion is much greater compared to series B.

Similarly, we may have two groups of labourers with the same mean salary and yet their distributions may differ widely. The mean salary may not be so important a characteristic as the variation of the items from the mean. To the student of social affairs the mean income is not so vitally important as to know how this income is distributed.

Are a large number receiving the mean income or are there a few with enormous incomes and millions with incomes far below the mean?

The three figures given in Box 3.1 represent frequency distributions with some of the characteristics.

The two curves in diagram (a) represent two distractions with the same mean X , but with different dispersions. 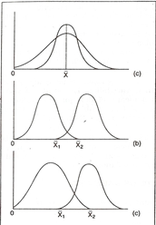 In the present chapter, we shall be especially concerned with the measures of variability or spread or dispersion. A measure of variation or dispersion is one that measures the extent to which there are differences between individual observation and some central or average value.

In measuring variation we shall be interested in the amount of the variation or its degree but not in the direction. For example, a measure of 6 inches below the mean has just as much dispersion as a measure of six inches above the mean.