Meaning and Definitions of Skewness

Since the first two, that is, average value and variability or dispersion have already been discussed in previous chapters, here our main spotlight will be on the shape of frequency distribution.

Generally, there are two comparable characteristics called skewness and kurtosis that help us to understand a distribution.

Two distributions may have the same mean and standard deviation but may differ widely in their overall appearance as can be seen from the following:

In both these distributions the value of mean and standard deviation is the same ( X = 15, s = 5). But it does not imply that the distributions are alike in nature. 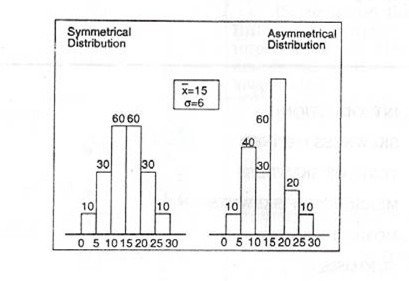 Some important definitions of skewness are as follows:

"When a series is not symmetrical it is said to be asymmetrical or " Croxton & Cowden.

"Skewness refers to the asymmetry or lack of symmetry in the shape of a frequency " -Morris Hamburg.

"Measures of skewness tell us the direction and the extent of skewness. In symmetrical distribution the mean, median and mode are identical. The more the mean moves away from the mode, the larger the asymmetry or " Simpson & Kalka

"A distribution is said to be 'skewed' when the mean and the median fall at different points in the distribution, and the balance (or centre of gravity) is shifted to one side or the other-to left or " -Garrett

The above definitions show that the term 'skewness' refers to lack of symmetry" i.e., when a distribution is not symmetrical (or is asymmetrical) it is called a skewed distribution.

It is clear from the diagram (a) that in a sym- metrical distribution the values of mean, median and mode coincide. The spread of the frequencies is the same on both sides of the centre point of the curve.

In the positively skewed distribution the value of the mean is maximum and that of mode least-the median lies in between the two as is clear from the diagram (b).

The following is the shape of negatively skewed distribution.

In the negatively skewed distribution the position is reversed, i.e. the excess tail is on the left-hand side. 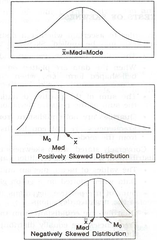