Product method is that method, which measures domestic money by estimating the contribution of each enterprise to production in the domestic territory of the country in an accounting year.

Value added is the difference between value of output of an enterprise and the value of its intermediate consumption.

To calculate the national income by this method, we need to identify and classify productive enterprises in three categories:

After classification, net value added in each sector is calculated in an accounting year. Gross value added is found by deducting the intermediate consumption from the value of production generated. 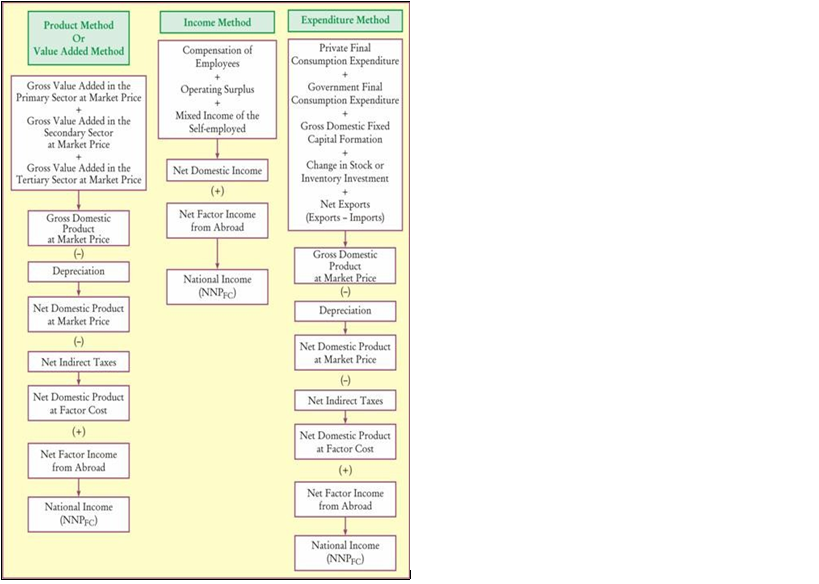 This method is also known as factor cost method. Under this method, national income is obtained by adding the incomes such as rent, wages, interest and profit received by all persons in the country during a year. In practice, the income figures are obtainable mostly from income tax returns, books of accounts and published accounts. To this, net income from foreign trade and net investment from abroad should be added.

According to income method, the net income payments received by all citizens of a country in a particular year are added up. The net incomes earned by the factors of production in the form of rent, wage, interest and profit aggregated but incomes in the form of transfer payments are not included in the national income.

Mixed Income: It is the income of the self employed persons such as farmers, shopkeepers, doctors etc. They generate goods and services with the help of their own land, capital and labour and thus earn mixed income in the form of interest, profit rent and wages. This income is included in national income.

In India, this method is used for adding up the net income arising from trade, transport, public administration, professional and domestic services. Due to lack of popularity of personal accounting practices, this method cannot be fully used or practiced. This method is used only for some minor sectors. None of these methods alone will give a more correct figure.

The figures of private consumption expenditure may be collected from retail trade activities during an accounting period.

4. Change in Stock as Inventory Investment

Change in stock is the difference between the opening stock and closing stock. All enterprises and trading companies incur expenditure on stock of raw materials; semi finished goods or finished goods.

5. Net Exports of Goods and Services

It is the difference between the value of exports and imports of a country during an accounting period. What the foreigners spend on a country’s exports is the part of expenditure on the Gross domestic product.