Model of Multiprocessor and Distributed System 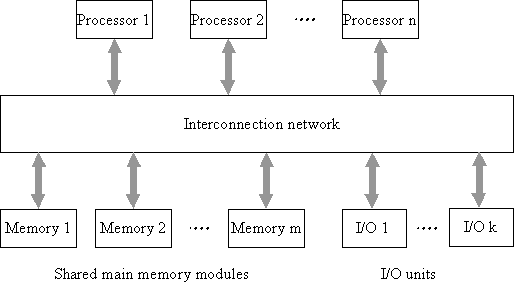 A distributed system is loosely coupled system where global status and workflow information update process is costly due to communication cost. Here each processor of the system has its own scheduler. 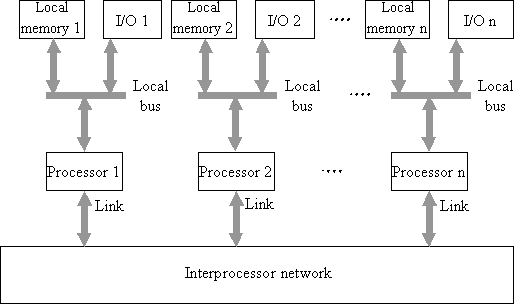 If no regular relation assumed and tasks may not be able to execute on all processors then such system is called unrelated heterogenous multiprocessors.

According to job shop model, each task Ti in the system is a chain of n(i) jobs, denoted by Ji,k for k = 1,2…..n(i). Adjacent jobs Ji, k and Ji, k+1 on the chain execute on different processors. Ji, k +1 becomes ready for execution when Ji,k completes its execution. Processor are specified for each job to run by the visit sequence Vi = (vi, 1, vi, 2, …… vi, n(i) ). Visit sequence V1 = (p1, p2) denote the job sequence has two jobs and first job execute on first processor and second job on second processor.

A flow shop is a special job shop which has identical visit sequence.

An end to end task Ti is periodic with period pi if the chain of n(i) jobs is released every pi (or more) and the jobs in the chain execute in turn on processors according to visit sequence Vi = (vi, 1, vi, 2, …… vi, n(i) ).

No jobs can make nested request for the resources residing on different processors. J1 on P1 and P1 à R1, P2 à R2

Inter processor communication (IPC) is a set of programming interfaces that allow a programmer to coordinate activities among different program processes that can run concurrently in an operating system. This allows a program to handle many user requests at the same time. Since even a single user request may result in multiple processes running in the operating system on the user's behalf, the processes need to communicate with each other. The communication between two or more processor in a multi-processor organization to share the information/data is called inter-processor communication.

By using different algorithms, we can partitionton an application system into the compnents called modules and assigns the modules to processor. These algorithms make the use of information provided by interconnection parameters of jobs like volume of shared data stored on memory exchanged beteen each pair of jobs. The time reqire to synchronize jobs and transmit the data among them comes into account in several ways as inter-processor communication. 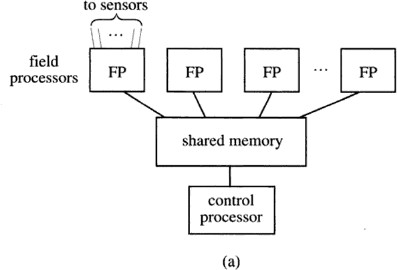 Fig(a). realtime monitor system that consists many field processor. Those jobs that collects and process the sensor data are called producer jobs since they generates the data. Those jobs that correlate and displays the data by executing on central processor are called consumer jobs. The jobs are communicated via. shared memory. Here each field processors are connected with shared memory via. a dedicated link that is shared by all field processors. The system contains three types of processors as field processor, shared-memory, control processor. The workload consists of end to end jobs, each job containing memory accessing jobs. In this way , delay in completion of each job caused by memory contention is taken into account. Hence shared memory cal be modeled as global resource whose synchronization processor is shared memory processor and both consumer and produceser requires this job. 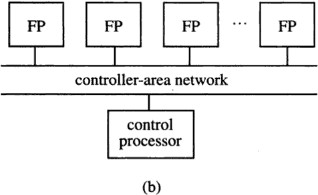 Fig(b). shows a model in which all the producer are connected via. a network as controller area network(CAN). The result produced by each job on field processor are sent via network to control processor. Here network can be modeled as processor on which message transmission jobs are scheduled on a fixed priority basis. There is no need to account the interprocessor communication cost because they are taken into account by message transmission jobs in network.