In the model of the real time communication, end users of the message application systems as source and destination residing in different host. The network interface of each host contains input queue and output queue.

The former interfaces with local application and provides them with message transport service. The next interface with the network below and provides network access and message transmission services to the TPH. The client- server architecture produce more delay such that it is not suitable communication network architecture for real time communication. 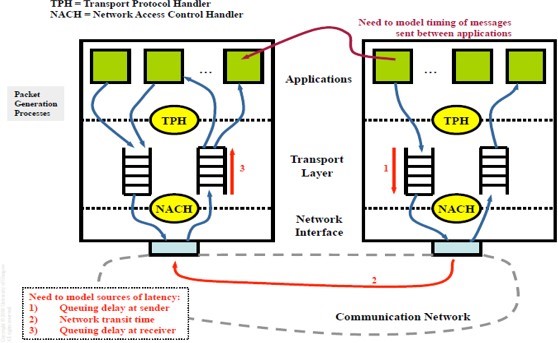 The fig. above shows the data path follow to transfer the message in between two hosts. Two marked circle TPH and NACH are transport protocol handler and network access control handler. When requested to send message by a local application task, the source TPH places the massage in output queue. Each outgoing message is delivered to network under the control of source NACH.

Here the end to end model by chain of jobs is used to represent the message sending activity. The application task available on source and destination are modeled as the predecessor as well as successor of the chain. At the beginning and end of the chain are source and destination chain are the transport protocol processing job. In between them, each job that access the network or transmits the message becomes ready for execution after its predecessor completes. Ideally the network delivers messages to receiver with no delay. In reality there is some of the delay are associated with queuing delay at sender, network transmit time and queuing delay at receiver as well as network.

Hence a synchronization protocol is needed to model the real time communication model.

The real time traffic means isochronous or synchronous traffic, consisting stream of message that are generated by their sources and delivered to their respective destination on continuous basis. The traffic includes the periodic, aperiodic and sporadic messages. The periodic and sporadic message are synchronous in nature and there requirement of guarantee of on time delivery whereas aperiodic message are asynchronous in nature and shows the soft timing constraint.

The connection oriented approach is used for real time traffic. According to this approach, a simplex logical connection is set up for transmission of each message stream between source and destination. The fixed routing is used to route the packets and chosen route is fixed until torn down of system or invocation of adaptation mechanism. The new connection is established if the existing network meets quality of service parameter like end to end delay, jitter etc. Generally packet switching network is preferred for transmission of message streams.