A NIC is a hardware board or card that you put into an empty slot in the back of your client computer or server. NIC is the interface between the PC and the physical network connection. This card physically connects to the cable that links the network. 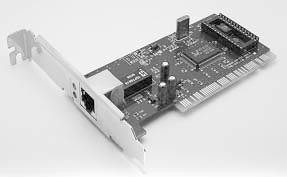 In addition to providing the physical connection to the networks, they also perform the following:

NIC prepare data so that it can transmit through the cable. The card translates data bit back and forth as they go from the computer to the cable and back again.

Each NIC has its own unique address that it imparts to the data stream. The card provides the data with an identifier. When it goes out on to the net and enables data seeking a particular computer to know where to exit the cable.

The card has RAM on it to help it, place the data so that it doesn’t overwhelm the receiving computer on the cable.

· Make (and agree on) the connection to another computer

Before it actually sends data, the NIC an electronic dialog with the other PC on the network that wants to communicate. They agree on thing like the maximum size of data groups to be sent. The total maximum size of data (amount), the time interval between data checks the amount of time that will elapse before confirmation that the data has arrived successfully and how much data each card hold before it overflows. NIC is an especially useful place to implement IP sec. technology. This is the place where end station data is turned into useful security management information where data can be queued in order of priority before transport and where hardware acceleration can be used to the greatest advantage to help facilitate encryption. An encrypted audio/video stream from a server to its clients provides a good example of the benefits of hardware acceleration. Users would experience much better network performance, if the stream were decrypted on an IP. (see enabled NIC). Instead of via decryption software only hardware acceleration in the NIC can help to improve network performance by accelerating the many math cycle required by encryption and decryption algorithms by offloading the process onto a NIC problems are avoided. Data transfers between the interfaces or nodes takes using this hardware address.

Hub is a basic networking component used in traditional 10-Mbps Ethernet networks to connect network stations to form a local area network (LAN). Hubs can be used for

Hubs are the foundation of traditional 10BaseT Ethernet networks. The hub receives signals from each station and repeats the signals to all other stations connected to the hub. In active hubs (which all of today’s hubs are), the signal received from one port is regenerated (amplified) and retransmitted to the other ports on the hub. Hubs thus perform the function of a repeater and are sometimes called multiport repeaters. From a logical cabling point of view, stations wired into a hub form a star topology.

Hubs generally have RJ-45 ports for unshielded twisted-pair (UTP) cabling, and they range in size from 4 to 24 or more ports for connecting stations to the hub, plus one or more uplink ports for connecting the hub to other hubs in a cascaded star topology. Hubs generally have various light-emitting diode (LED) indicator lights to indicate the status of each port, link status, collisions, and so on. Hubs with several different types of LAN connectors such as RJ- 45, BNC, and AUI are commonly called combo hubs.

Networking components extend a network by boosting the signal so that it can travel farther along the cabling.

Digital signals traveling on cables weaken with distance—a phenomenon known as attenuation. A repeater is a form of digital amplifier that works at the physical layer (layer 1) of the Open Systems Interconnection (OSI) reference model for networking to regenerate (amplify) the signal so that it can travel farther. Repeaters also perform other functions such as filtering out noise caused by electromagnetic interference (EMI), reshaping the signal, and correcting timing to remove signal jitter so that the signal can travel farther. Repeaters can also be used to join dissimilar media such as unshielded twisted-pair (UTP) cabling and thinnet, but they cannot be used to join dissimilar network architectures such as Ethernet and Token Ring. Repeaters are an inexpensive way to extend a network.

Other uses for repeaters include the following:

A networking component is used either to extend or to segment networks. Bridges work at the OSI data-link layer. They can be used both to join dissimilar media such as unshielded twisted-pair (UTP) cabling and fiber-optic cabling and to join different network architectures such as Token Ring and Ethernet. Bridges regenerate signals but do not perform any protocol conversion, so the same networking protocol (such as TCP/IP) must be running on both network segments connected to the bridge. Bridges can also support Simple Network Management Protocol (SNMP), and they can have other diagnostic features.

How does it work?

Bridges operate by sensing the source MAC addresses of the transmitting nodes on the network and automatically building an internal routing table. This table is used to determine which connected segment to route packets to, and it provides the filtering capability that bridges are known for. If the bridge knows which segment a packet is intended for, it forwards the packet directly to that segment. If the bridge doesn’t recognize the packet’s destination address, it forwards the packet to all connected segments except the one it originated on. And if the destination address is in the same segment as the source address, the bridge drops the packet. Bridges also forward broadcast packets to all segments except the originating one.

In a LAN where all nodes are connected directly to the switch, the throughput of the network increases dramatically. The three primary reasons for this increase are:

Routers are internetwork connectivity devices. An internetwork may consist of two or more physically connected independent networks. These networks can be of a different types. For example, they can be Ethernet and Token ring networks. Each network is logically separate and is assigned an address. Routers can use network addresses to assist efficient delivery of messages. Delivering packets according to logical network address is called routing. Routers perform routing. Routing is the process of finding a path from a source to every destination in the network. Routers are intelligent. They can use algorithms to determine the most efficient path for sending a packet to any given network. Routers can also be used to divide large busy LANs into smaller segments. The protocols like IP, IPX, and DDP are used to support routing functions. Routers are also employed to connect LAN to a wide area network (WAN).

Routers are of two types.