A system call is how a program requests a service from an operating system's kernel. This may include hardware related services (e.g. accessing the hard disk), creating and executing new processes, and communicating with integral kernel services (like scheduling). System calls provide an essential interface between a process and the operating system.

System calls provide the interface between a process and the operating system. Most operations interacting with the system require permissions not available to a user level process, e.g. I/O performed with a device present on the system, or any form of communication with other processes requires the use of system calls.

The system call (and the library procedure) return the number of bytes actually read in count. This value is normally the same as nbytes, but may be smaller, if, for example, end-of-file is encountered while reading.

It is explained in below diagram: 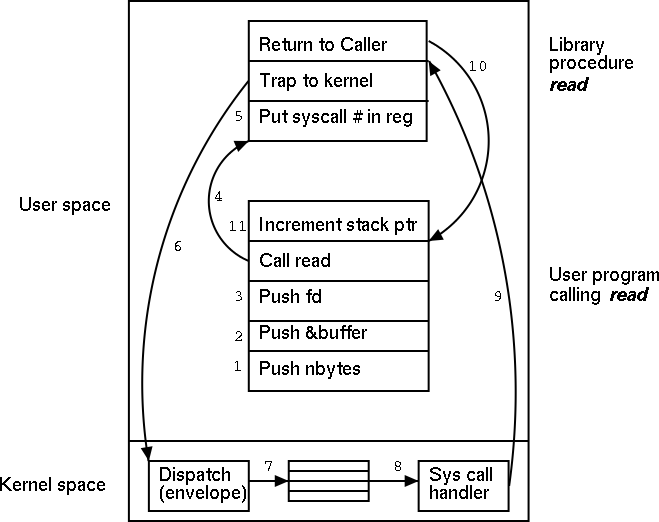 Shell and the kernel are the parts of this Operating system. These both parts are used for performing any operation on the system. When a user gives his command for performing any operation, then the request will go to the shell parts, the shell parts is also called as the interpreter which translate the human program into the machine language and then the request will be transferred to the kernel that means shell is just as the interpreter of the commands which converts the request of the user into the machine language.

Kernel is also known as heart of operating system and every operation is performed by using the kernel, when the kernel receives the request from the shell then this will process the request and display the results on the screen.

The various types of operations those are performed by the kernel are as followings: