Characteristics of Light Source of Communication 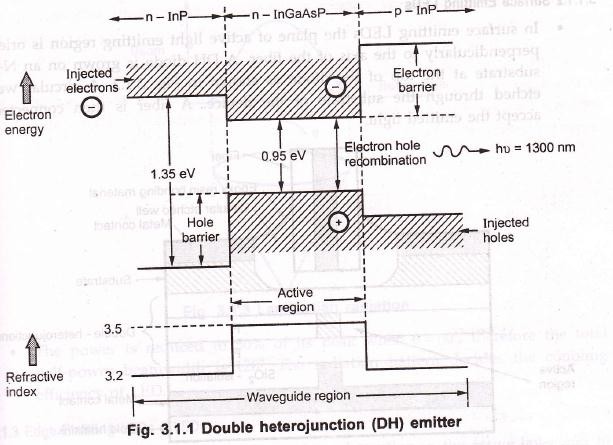 Both devices used a DH structure to constrain the carriers and the light to an active layer. 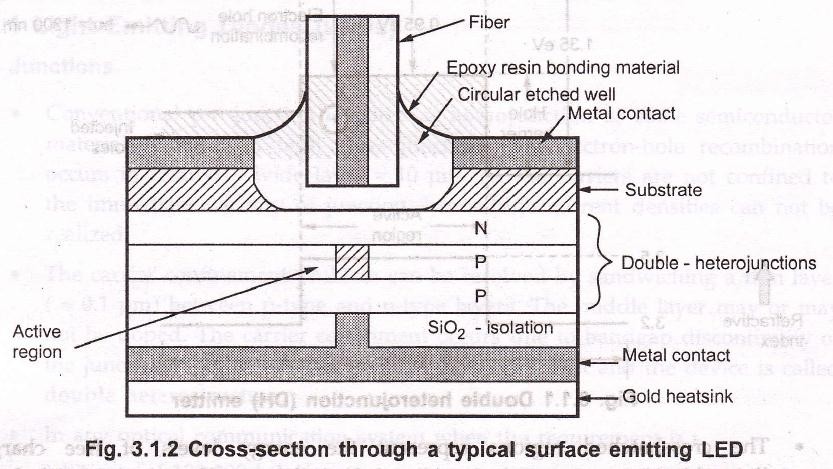 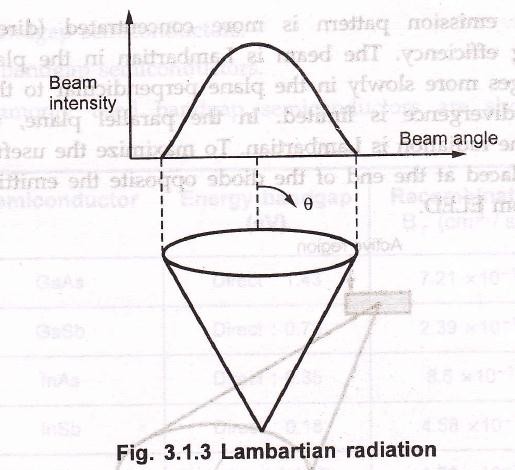 Edge emitter’s emission pattern is more concentrated (directional) providing improved coupling efficiency. The beam is Lambartian in the plane parallel to the junction but diverges more slowly in the plane perpendicular to the junction. In this plane, the beam divergence is limited. In the parallel plane, there is no beam confinement and the radiation is Lambartian. To maximize the useful output power, a reflector may be placed at the end of the diode opposite the emitting edge. Fig. 3.1.5 shows radiation from ELED. 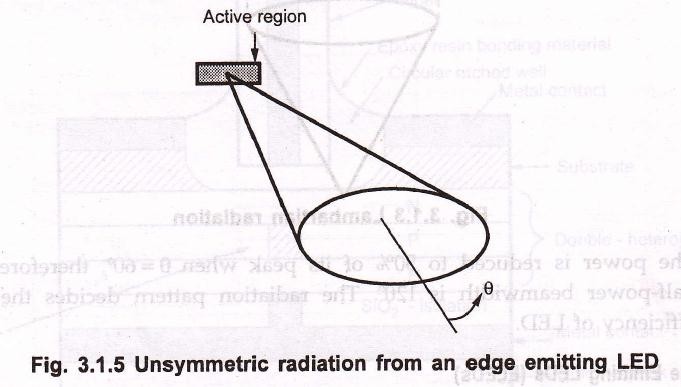 materials are compounds of group III elements (Al, Ga, In) and group V element (P, As, Sb). Some tertiary allos Ga1-x Alx As are also used. 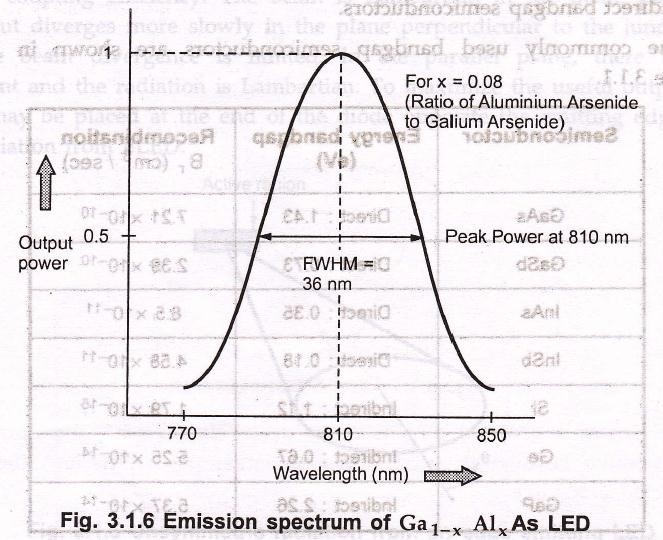 Solution : Comparing the alloy with the quartenary alloy composition.

Therefore internal quantum efficiency is given as –

efficiency is defined as the ratio of photons emitted from LED to the number of photons generated internally. It is given by equation

Example 3.1.3 : The radiative and non radiative recombination life times of minority carriers in the active region of a double heterojunction LED are 60 nsec and 90 nsec respectively. Determine the total carrier recombination life time and optical power generated internally if the peak emission wavelength si 870 nm and the drive currect is 40 mA. [July/Aug.-2006, 6 Marks]

Example 3.1.4 : A double heterjunciton InGaAsP LED operating at 1310 nm has radiative and non-radiative recombination times of 30 and 100 ns respectively. The current injected is 40 Ma. Calculate –

The operation of the device may be described by the formation of an electromagnetic standing wave within a cavity (optical resonator) which provides an output of monochromatic highly coherent radiation. 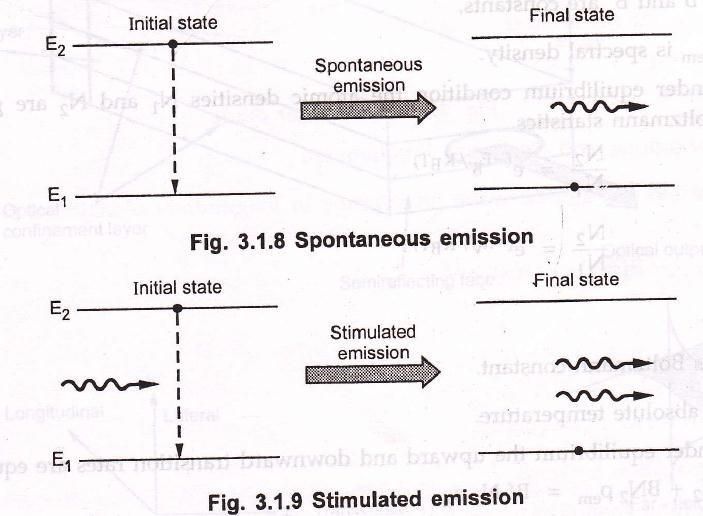 A, B and B’ are constants. ρem is spectral density. 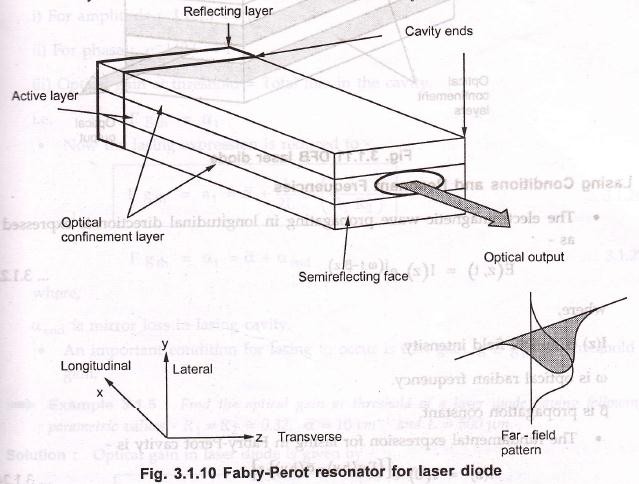 Light propagating along the axis of the interferometer is reflected by the mirrors back to the amplifying medium providing optical gain. The dimensions of cavity are 25-500 µm longitudinal 5-15 µm lateral and 0.1-0.2 µm transverse. Fig. 3.1.10 shows Fabry-Perot resonator cavity for a laser diode. 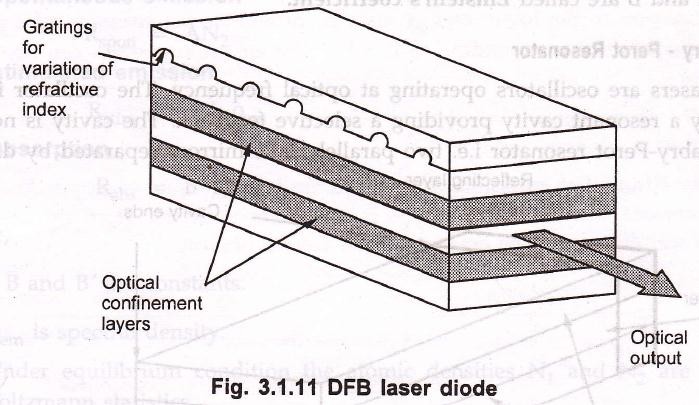 Γ is optical field confinement factor or the fraction of optical power in the active layer. α is effective absorption coefficient of material.

z is distance traverses along the lasing cavity.

The condition of lasing threshold is given as –

Solution : Optical gain in laser diode is given by –

3.1.12 for a typical laser diode. Below the threshold current (Ith) only spontaneous emission is emitted hence there is small increase in optic power with drive current. At

threshold when lasing conditions are satisfied. The optical power increases sharply after the lasing threshold because of stimulated emission.

where, β is constant for device structure.

m is an integer.

λ0 is center wavelength in spectrum. σ is spectral width of the gain.

The wavelength Spacing is given as –

Optical Characteristics of LED and Laser 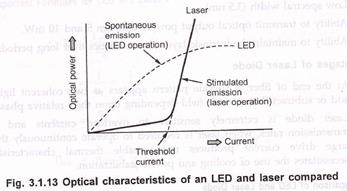 Spectral and Spatial Distribution of Led and Laser

Comparison of LED and Laser Diode