How does the ANSI-SPARC architecture promote logical and physical data independence in databases?

The American National Standards Institute (ANSI) Standards Planning and Requirements Committee (SPARC) produced the ANSI-SPARC architecture in 1975 (ANSI, 1975). It is a three-level schema architecture which have the physical, logical and external levels.

The ANSI/SPARC architecture and framework have been widely applied in relational databases. Information at the levels is represented by the internal, conceptual, and external schemas. The diagram below illustrates the ANSI-SPARC architecture. 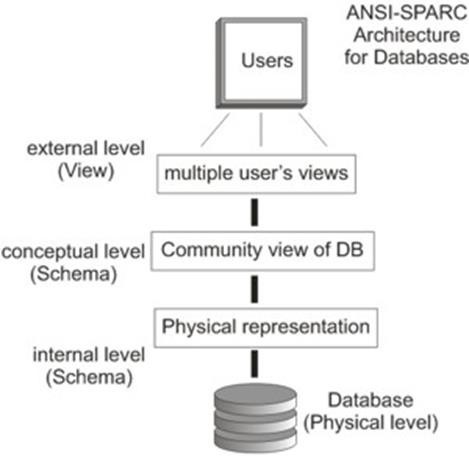 e.g. by adding a record type or data item. Only the view definition and the mappings need to be changed in a DBMS that supports logical data independence. After the conceptual schema undergoes a logical reorganization, application programs that reference the external schema constructs must work as before.

Physical data independence is the ability to change the internal schema without having to change the conceptual schema. Therefore, the external schemas need not be changed as well. It allows users to frame queries in terms of the logical structure of the data, letting a query processor automatically translate them into optimal plans that access physical storage structures. For example, creating additional access structures to improve the performance of retrieval or update in a database must not affect the users provided the same data as before remains in the database.

In general, physical data independence exists in most databases and file environments where physical details such as the exact location of data on disk, and hardware details of storage encoding, placement, compression, splitting, merging of records, and so on are hidden from the user.

Using these three levels, it is possible to use complex structures at internal level for efficient operations and to provide simpler convenient interface at external level. This also helps to maintain data independence between the schemas. It helps different users to access same data with different customized views and users are not concerned about the physical data storage details. The physical storage structure of the database can be changed without requiring changes in internal structure of the database as well as users’ view. Also, no user should know where or how the physical bits are stored which provide clients with only the data that they should be allowed to see. The conceptual structure of the database can also be changed without affecting end users.

The ANSI-SPARC architecture can make it easier to achieve true data independence, both physical and logical. However, the two levels of mappings create an overhead during compilation or execution of a query or program, leading to inefficiencies in the DBMS. This is the reason why few DBMSs have implemented the full ANSI-SPARC architecture.

1. The Term “Business Intelligence” is also used as an alternative term for Data Mining. Justify appropriateness of term with comparison of the term “Artificial Intelligence”

4. What is Hadoop Architecture and Storage?

5. What is Big Data and Characteristics of Big Data V3s?

8. What do you mean by data mart? What are the different types of data mart?

11. What is Data Warehouse? Explain it with Key Feature

13. What are the Major Issues and Challenges of Data Mining?

15. What is Enterprise Warehouse?

17. What are dependent and independent data marts?

18. What is Virtual Warehouse?

20. What are Research prototypes?

21. What is the difference between generic single-task tools and generic multi-task tools?

22. What are the areas in which data warehouses are used in present and in future?

24. What are the factors involved while choosing data mining system?

26. What is spatial data mining?

27. What are the DB Miner tool in data mining?

28. How data mining is used in health care analysis?

29. How data mining is used in banking industry?

30. Explain the types of data mining.

31. What does audio data mining mean?

37. What is Hierarchical method?

38. What is CLARA and CLARANS?

39. What do u mean by partitioning method?

42. What are interval scaled variables?

43. What are the different types of data used for cluster analysis?

44. What are the requirements of cluster analysis?

45. What are the fields in which clustering techniques are used?

46. What is Clustering and Cluster Analysis?

47. What are the techniques to improve the efficiency of Apriori algorithm?

48. How to generate association rules from frequent item sets?

49. What is the purpose of Apriori Algorithm?

52. How is a data warehouse different from a database?

55. What is Cluster Analysis?

56. What are the advanced database systems?

57. What is Descriptive model?

58. What is Predictive model?

59. What is the purpose of Data mining Technique?

60. What is Genetic algorithm?

63. What are the some of the data mining techniques?

64. What is the Architecture of a typical data mining?

65. What is the use of the knowledge base?