What are the fundamental steps in Digital Image Processing?

Image acquisition is the first process shown in Fig.2. Note that acquisition could be as simple as being given an image that is already in digital form. Generally, the image acquisition stage involves preprocessing, such as scaling.

Image enhancement is among the simplest and most appealing areas of digital image processing. Basically, the idea behind enhancement techniques is to bring out detail that is obscured, or simply to highlight certain features of interest in an image. A familiar example of enhancement is when we  increase  the  contrast  of an image because ―it  looks  better.‖  It  is  important to keep  in mind that enhancement is a very subjective area of image processing.

Color image processing is an area that has been gaining in importance because of the significant increase in the use of digital images over the Internet. 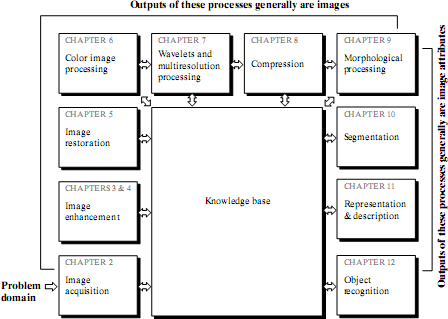 Wavelets are the foundation for representing images in various degrees of resolution. Compression, as the name implies, deals with techniques for reducing the storage required to save an image, or the bandwidth required to transmit it. Although storage technology has improved significantly over the past decade, the same cannot be said for transmission capacity. This is true particularly in uses of the Internet, which are characterized by significant pictorial content. Image compression is familiar (perhaps inadvertently) to most users of computers in the form of image file extensions, such as the jpg file extension used in the JPEG (Joint Photographic Experts Group) image compression standard.

Morphological processing deals with tools for extracting image components that are useful in the representation and description of shape.

Representation and description almost always follow the output of a segmentation stage, which usually is raw pixel data, constituting either the boundary of a region (i.e., the set of pixels separating one image region from another) or all the points in the region itself. In either case, converting the data to a form suitable for computer processing is necessary. The first decision that must be made is whether the data should be represented as a boundary or as a complete region. Boundary representation is appropriate when the focus is on external shape characteristics, such as corners and inflections. Regional representation is appropriate when the focus is on internal properties, such as texture or skeletal shape. In some applications, these representations complement each other. Choosing a representation is only part of the solution for transforming raw data into a form suitable for subsequent computer processing. A method must also be specified for describing the data so that features of interest are highlighted. Description, also called feature selection, deals with extracting attributes that result in some quantitative information of interest or are basic for differentiating one class of objects from another.

Recognition  is  the  process  that  assigns  a  label  (e.g.,  ―vehicle‖)  to  an  object  based  on  its descriptors. We conclude our coverage of digital image processing with the development of methods for recognition of individual objects.

56. Explain the process of image acquisition.

57. Explain about elements of visual perception.

58. What are the components of an Image Processing System?