This makes queue as FIFO(First in First Out) data structure, which means that element inserted first will be removed first.

Which is exactly how queue system works in real world. If you go to a ticket counter to buy movie tickets, and are first in the queue, then you will be the first one to get the tickets. Right? Same is the case with Queue data structure. Data inserted first, will leave the queue first. 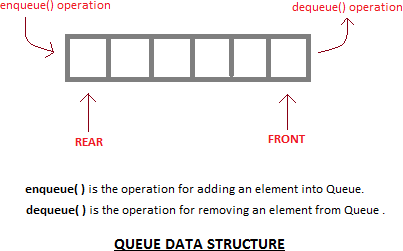 Queue, as the name suggests is used whenever we need to manage any group of objects in an order in which the first one coming in, also gets out first while the others wait for their turn, like in the following scenarios:

Initially the head(FRONT) and the tail(REAR) of the queue points at the first index of the array (starting the index of array from 0). As we add elements to the queue, the tail keeps on moving ahead, always pointing to the position where the next element will be inserted, while the head remains at the first index. 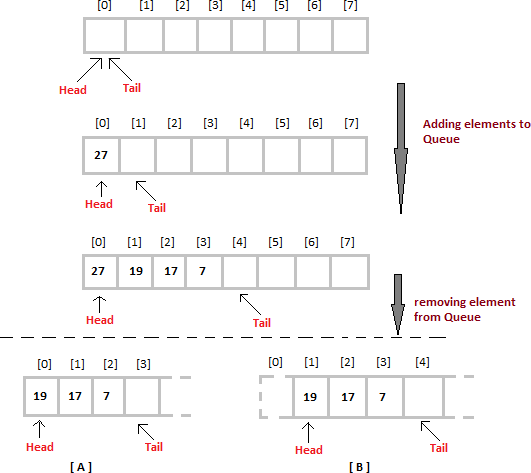 When we remove an element from Queue, we can follow two possible approaches (mentioned [A] and [B] in above diagram). In [A] approach, we remove the element at head position, and then one by one shift all the other elements in forward position.

In approach [B] we remove the element from head position and then move head to the next position.

In approach [A] there is an overhead of shifting the elements one position forward every time we remove the first element.

In approach [B] there is no such overhead, but whenever we move head one position ahead, after removal of first element, the size on Queue is reduced by one space each time.

Just like Stack, in case of a Queue too, we know exactly, on which position new element will be added and from where an element will be removed, hence both these operations requires a single step.

Priority Queue is more specialized data structure than Queue. Like ordinary queue, priority queue has same method but with a major difference. 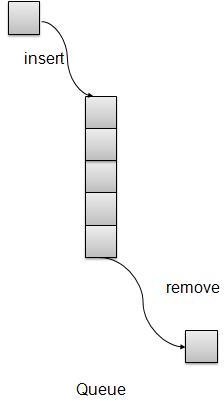 We're going to implement Queue using array in this article. There is few more operations supported by queue which are following.

Whenever an element is inserted into queue, priority queue inserts the item according to its order. Here we're assuming that data with high value has low priority.

Whenever an element is to be removed from queue, queue get the element using item count. Once element is removed. Item count is reduced by one. 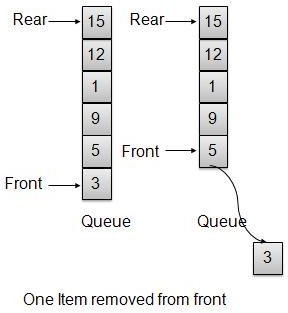