Quick Sort is also based on the concept of Divide and Conquer, just like merge sort. But in quick sort all the heavy lifting(major work) is done while dividing the array into subarrays, while in case of merge sort, all the real work happens during merging the subarrays. In case of quick sort, the combine step does absolutely nothing.

It is also called partition-exchange sort. This algorithm divides the list into three main parts:

Hence after the first pass, pivot will be set at its position, with all the elements smaller to it on its left and all the elements larger than to its right. Now 6 8 17 14 and 63 37 52 are considered as two separate sunarrays, and same recursive logic will be applied on them, and we will keep doing this until the complete array is sorted.

Following are the steps involved in quick sort algorithm:

Below, we have a pictorial representation of how quick sort will sort the given array. 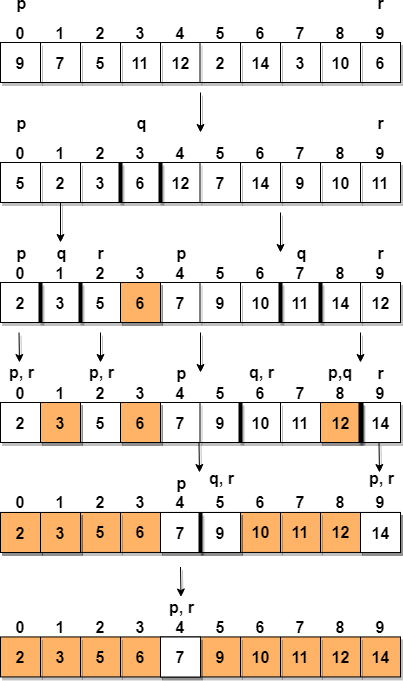 In step 1, we select the last element as the pivot, which is 6 in this case, and call for partitioning, hence re-arranging the array in such a way that 6 will be placed in its final position and to its left will be all the elements less than it and to its right, we will have all the elements greater than it.

And we again call for partitioning.