The primary responsibility of a router is to direct packets destined for local and remote networks by:

When to use static Routing:

A network consists of only a few routers. Using a dynamic routing protocol in such a case does not present any substantial benefit. On the contrary, dynamic routing may add more administrative overhead.

A network is connected to the Internet only through a single ISP. There is no need to use a dynamic routing protocol across this link because the ISP represents the only exit point to the Internet.

A large network is configured in a hub-and-spoke topology. A hub-and-spoke topology consists of a central location (the hub) and multiple branch locations (spokes), with each spoke having only one connection to the hub. Using dynamic routing would be unnecessary because each branch has only one path to a given destination through the central location.

Those networks that are directly connected to the Router are called connected routes and are not needed to configure on the router for routing. They are automatically routed by the Router.

Adaptive routing algorithm When a ROUTER uses an adaptive routing algorithm to decide the next computer to which to transfer a PACKET of data, it examines the traffic conditions in order to determine a route that is as near optimal as possible. For example, it tries to pick a route that involves communication lines that have light traffic. This strategy is in contrast to a NON-ADAPTIVE ROUTING ALGORITHM. (Also called Dynamic route)

An AS is a collection of networks under a common administration that share a common routing strategy. To the outside world, an   AS   is viewed   as   a   single   entity. The AS may be run by one or   more   operators   while   it presents   a   consistent   view of   routing to the external world. The American Registry of Internet Numbers (ARIN), a service provider, or an administrator assigns a 16-bit identification number to each AS. 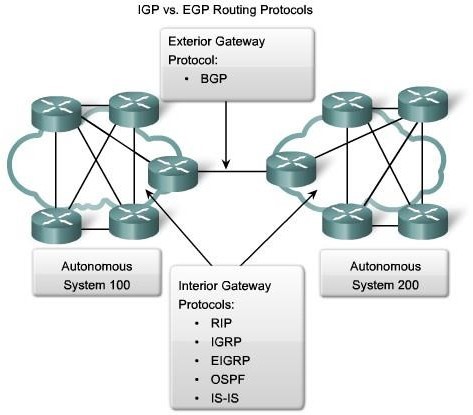 Each routing protocol uses its own metric. For example, RIP uses hop count, EIGRP uses a combination of bandwidth and delay, and Cisco's implementation of OSPF uses bandwidth.