Anything that carries information is called as signals. It is a real or complex value function of one or more variables. For example: temperature is one dimensional signal, image is 2-dimensional. Processing means operating in some fashion on a signal to extract some useful information. The signal is processed by system which can be electronic, mechanical or a program.

The bandwidth demand of a signal processing depends on the sampling rate and number of outputs at a time. A real signal processing application computes one or more outputs in each sampling period. Each output x(k) is a weighted sum of n inputs y(i).

Where a(k,i) are the weights whose values are known and fixed. The weight value in signal processing system takes at least one addition or multiplication. This computation transforms the given representation of objects(voice, image or radar signal) in terms of inputs y(i) into another representation in terms of outputs x(k). Different set of weights a(k,i) give different kind of transformation. 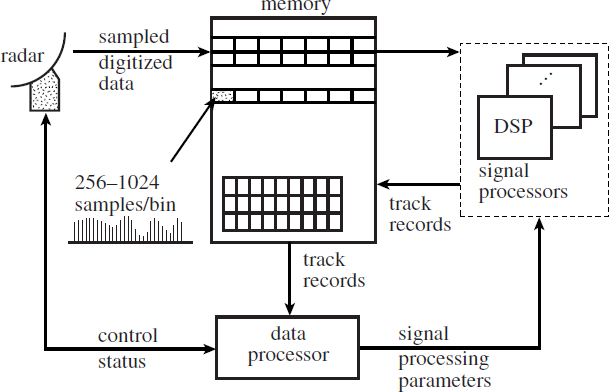 To search for objects of interest in its coverage area, the radar scans the area by pointing its antenna in one direction at a time. During the time the antenna dwells in a direction, it first sends a short radio frequency pulse. It then collects and examines the echo signal returning to the antenna. The echo signal consists solely of background noise if the transmitted pulse does not hit any object. On the other hand, if there is a reflective object (e.g., an airplane or storm cloud)at a distance x meters from the antenna, the echo signal reflected by the object returns to the antenna at approximately 2x/c seconds after the transmitted pulse, where c = 3×108 meters per second is the speed of light. The echo signal collected at this time should be stronger than when there is no reflected signal. If the object is moving, the frequency of the reflected signal is no longer equal to that of the transmitted pulse. The amount of frequency shift (called Doppler shift) is proportional to the velocity of the object. Therefore, by examining the strength and frequency spectrum of the echo signal, the system can determine whether there are objects in the direction pointed at by the antenna and if there are objects, what their positions and velocities are. The radar memory is divided into small partitions called bin. The bin is equivalent to the small distance during which the samples are generated.

Strong noise and man-made interferences, including electronic countermeasure (i.e., jamming), can lead the signal processing and detection process to wrong conclusions about the presence of objects. A track record on a non - existing object is called a false return.

An application that examines all the track records in order to sort out false returns from real ones and update the trajectories of detected objects is called a tracker. Tracker assigns each measured value (i.e., the tuple of position and velocity contained in each of the track records generated in a scan) to a trajectory.

Gating is the process of putting each measured value into one of two categories depending on whether it can or cannot be tentatively assigned to one or more established trajectories.

The gating process tentatively assigns a measured value to an established trajectory if it is within a threshold distance G away from the predicted current position and velocity of the object moving along the trajectory. The threshold G is called the track gate. 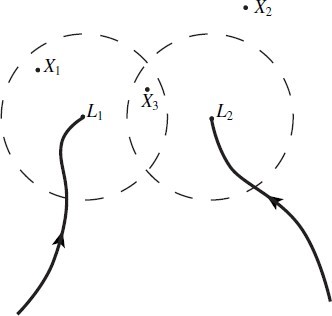 Above fig. illustrates this process. At the start, the tracker computes the predicted position (and velocity) of the object on each established trajectory. In this example, there are two established trajectories, L1 and L2. X1, X2, and X3 are the measured values given by three track records. X1 is assigned to L1 because it is within distance G from L1. X3 is assigned to both L1 and L2 for the same reason. On the other hand, X2 is not assigned to any of the trajectories. It represents either a false return or a new object. Since it is not possible to distinguish between these two cases, the tracker hypothesizes that X2 is the position of a new object. Subsequent radar data will allow the tracker to either validate or invalidate this hypothesis. In the latter case, the tracker will discard this trajectory from further consideration.